Where are They Now? Lorenzo 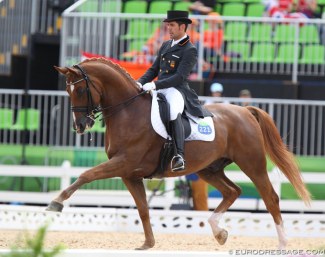 In 2016 Spanish rider Severo Jurado Lopez made his major international break through aboard the Bavarian warmblood Lorenzo. The pair blew the roof off the CDIO Aachen with their freestyle to music and went on to place fifth at the 2016 Rio Olympic Games. After Rio the chestnut sold to Danish born American Charlotte Jorst as her future hope, but the horse never appeared in the show ring. Where is he Now?

The 14-year old Bavarian warmblood Lorenzo is by Lord Loxley out of Bologna (by Rubin Royal).

He is bred by Martin Niedermair in Germany and sold to the Danish couple Kirsten and Jorn Elkjaer-Holm as a 3-year old.

In 2013 Henningsen took Lorenzo to Prix St Georges level and competed him at national small tour level through the spring of 2015.

Lorenzo was then sent to Andreas Helgstrand to be sold. He got paired up with the Spanish Severo Jurado Lopez, who made his Grand Prix debut on Lorenzo in Denmark in November 2015.

Their international show debut followed in February 2016 at the CDI Vestfold in Norway, and from there a stellar rise on the FEI World Riders Ranking begun.

They showed at CDI's in Herning, Hagen and Odense before making a major splash at the CDIO Aachen where they became the crowd favourites in the freestyle and finished fourth with 83.350%. The pair became the Spanish team anchor at the 2016 Rio Olympic Games and finished fifth in the Kur to Music with 83.625%. Also in Rio, their freestyle was one of the most crowd beloved kur rides.

After Rio, the pair tried to qualify for the 2017 World Cup Finals and had excellent start at the CDI-W's in Odense and Salzburg, but they lost their groove at the CDI-W in Amsterdam, where the horse finished 10th in the Grand Prix and got eliminated from the freestyle.

In May 2017, Danish born American Charlotte Jorst acquired Lorenzo as her Grand Prix schoolmaster, alongside the two other Grand Prix horses -  Nintendo and Akeem Foldager - which she sourced at Helgstrand Dressage. In an interview Jorst said that she negotiated on the 3 million euro asking price before she bought the gelding.

Charlotte had scheduled to make her show debut on Lorenzo at the 2017 CDN Del Mar Halloween Spooktacular on 7 - 8 October 2017 but the horse was scratched last minute. According to the rider, Lorenzo had a reaction to a spider bite. At the end of October, however, he was diagnosed with an injury that would sidetrack him for six months.

Looking back Lorenzo's Amsterdam entry in January 2017 was the gelding's last appearance in the show ring. So where is he Now?

The injury that took six months to recover has now taken three years.

In October 2018, Eurodressage touched base with Charlotte, who explained that "Lorenzo is doing great. He is returning to Europe this month to be in his normal surroundings. I'm not sure if I’ll sell Lorenzo. Once he’s back doing the Grand Prix, I probably would, but nothing is cast in stone."

Unfortunately Lorenzo's rehabilition in Denmark is still ongoing, but Jorst is optimistic about his progress.

"He’s doing extremely well in his rehab and we hope he’ll return to the sport this fall," she told Eurodressage. "He should have no lingering issues so hopefully he’ll be at the Olympics in 2021."

The injury turned out to be hoof related, according to Charlotte.

"It’s taken him very long. In the beginning we thought it was a shoeing issue. I sent him back to Helgstrand so that he could be with his usual farrier. He’s been there ever since. He is now sound and I’m still undecided whether I’ll ride him or sell him. He’s such a wonderful horse, I’m just so happy he’s doing well and I look so much forward to riding him again very soon."

We asked if Lorenzo is already back in light training, Jorst replied, "he’s still at the rehab facility and in a couple of months he’ll be going back to work. We need to find a rider at Helgstrand or send him back over to me."