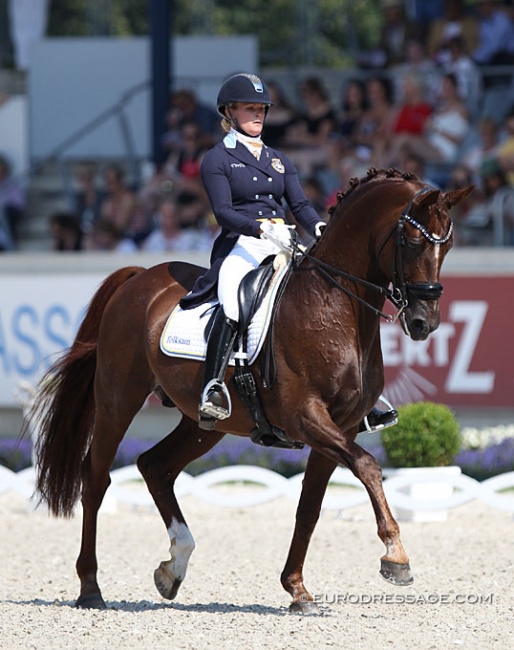 Duendecillo P is a Finnish warmblood licensed stallion by Don Schufru out of Apres Pearl (by Midt-West Ibi Light). He is bred and owned by Anne Niemi.

Niemi sent an 8-year old Duendecillo P into training with Swedish professional Jeanna Hogberg in 2012. The pair made its international show debut at small tour level in 2014 at the CDI Vidauba in the south of France.

In 2015 they moved up to Grand Prix level with their CDI Grand Prix debut again in Vidauban. The stallion was only briefly shown in 2016 but returned with Hogberg in 2017.

In the 2018 WEG year they campaigned  the most with starts in Gothenburg, Aalborg, Kristiansand, Uggerhalne, Falrsterbo, Aachen and Helsinki. In 2019 they did only one CDI in Herning and a year later, in February 2020, they made their come back at the CDI-W Gothenburg, their last show together, where they scored 68.261% in the Grand Prix.

Duendecillo P was sidelined for a couple of months this spring due to an injury, but has recovered fully. However, this prompted owner Niemi to decided on shifting a few gears back with the stallion.

"Duendecillo P did got a massive traumatic muscle injury in the paddock in March 2020," Niemi told Eurodressage. "Now the stallion is at home and he has healed from the injury. He has received a bit of an easier life with a young rider who hopefully loves him."

Niemi has allocated the ride on Duendecillo P to the 15-year old multi-talented Tuisku Lamberg, who has been competed in dressage and eventing.

In 2019 Tuisku has been competing Bachio at junior level at shows in Ypaja, Pornainen and the 2019 Nordic Baltic Championships in Aarhus. She is also keen eventer and placed fourth at the Finnish Eventing Championships

"Both the stallion and  Tuisku have their 16th birthday in June 2020," said Anne. "The stallion will stay in our stud and for this upcoming show season he and Tuisku will concentrate on competing and hopefully represent Finland at bigger events."