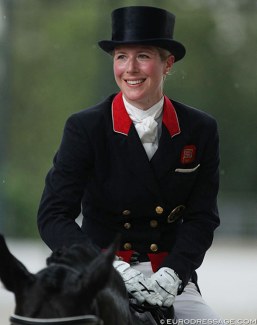 British Grand Prix rider Laura Tomlinson (née Bechtolsheimer) is a double British Olympian, having competed at the 2008 and 2012 Olympic Games. At the 2012 Summer Games in London she won team gold and individual bronze. At the 2010 World Equestrian Games she won triple silver. She competed at the 2009 and 2011 European Dressage Championships, winning team silver and individual bronze in 2009 and team gold and individual bronze in 2011. Married to polo player Mark Tomlinson, Laura is a mom to three children and currently competing at international Grand Prix level with Capri Sonne JR and Rose of Bavaria.

On my 3rd birthday when the door bell rang and there was my first pony, a little Welsh mountain pony called Peacock.

Roger Federer, he is such a champion but never lost his class, he supersedes his sport and is a roll model to people from all walks of life.

I am nearly always happy!

Anything bad happening to one of cry children.

I would have to ask my husband!

Tough one, do dogs and horses count as possession?!

I try to take a day at a time but in my plans are to be back at the top of my sport.

Seeing someone or something suffer.

Saying yes to my husband's proposal.

Everything, oh and life!

Oh man, tough one.  I think Phil Knight (the founder of Nike, I am just reading his book,) and Andre Agassi.

Clean the showers at university, there were mushrooms growing out of them!

The 2008 Olympics: I was so young and Alf (Mistral Hojris) was so wild and we went all that way and it was just a disaster...but we learnt a lot!

I don't believe in regrets!

I am very content but I suppose a cook would be nice, its easier to eat healthy if someone has prepared you a great healthy meal!

Don't apologise for who you are and the opportunities you have had, just make the most of them.

My daughter for shouting during home schooling!!

I am a pretty relaxed person but I guess when the kids are in bed and its just my husband and me after a long day, making food together with a glass of nice red wine.

My father died recently so I cry quite a bit at the moment, the last thing was probably hearing a song he loved.

Not sure, I like speed and adrenalin so whether in a car or on a horse (not a dressage horse!) or on skis or on a sledge, I have probably had a few near misses!

As fun, kind and loyal.