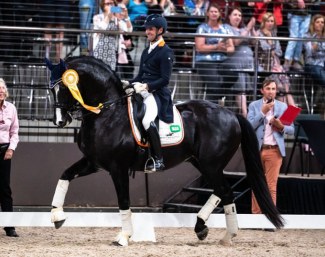 New Zealand Grand Prix rider John Thompson is one of his country young rising Grand Prix stars. He made his international show debut in 2013 aboard Astute and his CDI Grand Prix debut on Antonello in 2015. Thompson won the Horse of the Year title in Hastings in 2016 and 2018 and became the New Zealand Grand Prix Champion in 2018. He was nominated for the 2018 World Equestrian Games, but had to withdraw due to fitness issues. He returned to the Grand Prix arena in 2020 on a new ride, Chemistry. Thompson grew up in Australia, moved back to New Zealand in 2016, but is now back in Australia.

My brother Charles. I always have.

Get me a coffee before I turn into a super villain.

Slow walkers… come on people I’ve got horses to ride

Tommy… he is my best friend. Yes, this is a horse…

I could tell you… but then I’d have to kill you.

Not doing better than yesterday

Not shaving my head during isolation

Everything. They are wonderful

Mick Jagger – he would have some good stories to tell!

One day of trying out being a farrier… happy I stuck with dressage!.

Having to withdraw the night before World Equestrian Games in 2018. Everyone has their sad story that makes you grow and this will be mine.

The dress code for dressage… who chooses tight white pants as their sporting gear?!.

Qualifying for the Olympics and being selected for the World Equestrian Games before my 30th birthday.

The Maldives in a hut over blue water… that’s a nice thought! Now back to riding 1000 horses

The judges for my acquired taste in house music – more suited to dance festivals than your typical classical dressage tunes!

Mind control… no more 7’s for my walk!

Cutting my wrist open when I ran through a window pretending to be an aeroplane… I was 10. Don’t judge!

As a great horseman and a sensational drinking buddy.