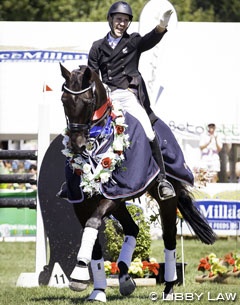 John Thompson and the New Zealand bred Hanoverian gelding Antonello have joined the select group of combinations who have won both the Burkner Medal and Horse of The Year title in the same year at the 2016 CDI Hastings in New Zealand. Antonello becomes the only horse to have achieved this double with two different riders. Antonello previously won both titles with Louisa Hill in 2012 before being selected for the London Olympics.

John & “AJ” won the Special (69.896%) after conceding the Day 1 Grand Prix to Julie Brougham and her chestnut pocket rocket Vom Feinsten (by Fidermark) . This pair made a couple of uncharacteristic errors in the Special leaving the way open for Wendi Williamson and Deja Vu MH (by De Niro) to score 69.854% and take the blue ribbon. Taranaki ‘s Abbie Deken on KH Ambrose scored 69.083% and got the yellow, while the green went to Brougham with 68.938%. Seeing all four combinations finishing within 1% of each other showed just how close the competition is now in NZL – no room for errors ! 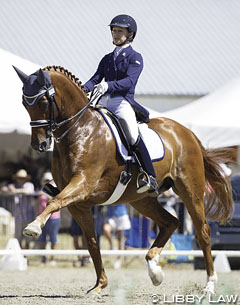 On Sunday, the Grand Prix Freestyle to music captured and entertained the crowd under brilliant sunny skies in Hastings. It was just a year ago that Julie Brougham and Vom Feinsten had broken the Australasian Freestyle record with 76.02% – a record which was still intact despite numerous CDI competitions being held on both sides of the Tasman – could they beat their own record ? They danced into the arena in third to last position and just didn’t miss a beat – harmonious – beautifully choreographed – trademark energy

A few minutes later, thanks to the scintillating speed of scorer Sara Bright the crowd went wild when it was announced that the new record was now 76.3% - what a day. This final mark included a 78.750% for artistic and a whopping 81% for Artistic from judge Riexinger.

Thompson and Antonello followed – powerful with music for the younger generation to enjoy – the final one handed piaffe / passage tour was spectacular,  really setting the crowd alight – but had he done enough ? Not quite said the judges and they go into second place on 73.800%

The final combination of Williamson and DejaVu MH in just their second CDI, push hard for third on 73.675% - Williamson’s husband Jon is the music man in their stable and again some well choreographed and great interpretation scored well So the 2016 Horse of the Year title and the Jude Simpson Memorial Trophy went to Thompon and Antonello, the Rigoletto trophy for the top scoring freestyle and runner up to Brougham and Vom Feinsten.  Third Wendi Williamson and DejaVu MH, fourth Abbie Deken on KH Ambrose, 5th Anya Noble on Airthrey Highlander, sixth Jody Hartstone on Ali Baba.

Gotthilf Riexinger 5*FEI judge from Germany described the show as a “mini- Aachen”. “Everything is here – the organisers of the dressage have done a very good job – even down to the wonderful scribes (writers). The atmosphere between the judges, and the judges and riders is very good – everyone is working together – everyone is so friendly and you have looked after us so well – my compliments to everyone”. Praise indeed from one of Europe’s most respected judges.