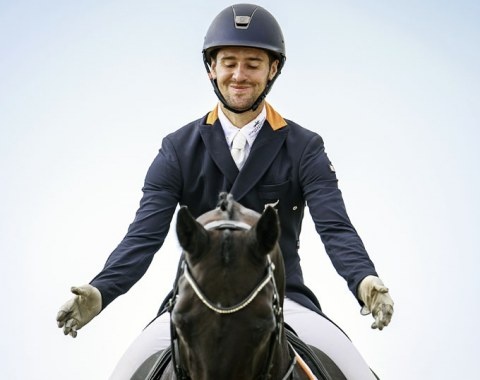 New Zealand dressage representative John Thompson has today made the heart-breaking decision to withdraw his horse Antonello from the 2018 FEI World Equestrian Games.

“I am absolutely devastated,” said the 28-year-old from Hamilton. “This would have to be the lowest point of my competition career. I feel AJ is not 100% after being transported into Tryon, and in the best interest of my mate, we’ve made the decision to withdraw.”

The 17-year-old horse had full vet clearance to fly from New Zealand in July but failed to fire in his first competition on US soil at Saugerties in New York. AJ was then transported to Kentucky where he received specialist care. He was given the all clear by a top equine veterinary hospital and their training was progressing well.

“We did several Grand Prix tests under the watchful eye of a fellow international rider and everything was on track,” said Thompson.

However, since arriving at the Games, it has become clear something is not quite right and neither vets nor physios can pin point the problem. It was during training at the Games venue, that Thompson felt the horse was in discomfort.

“It is heart-breaking for everyone,” said dressage chef d’equipe Wendy Hamerton. “The horse looks a million dollars, but it is unfair to expect him to compete internationally when he is like this.”

The decision was made in consultation with Thompson, Hamerton and team vet Noel Power

Thompson extended his thanks and  gratitude to the many who have supported him and wished his team-mate Julie Brougham (Palmerston North) and Vom Feinsten the best of luck for their competition.

“While this is not the end I wanted for our Games, I will take a lot of learning away with me and put that to good use in the future.”