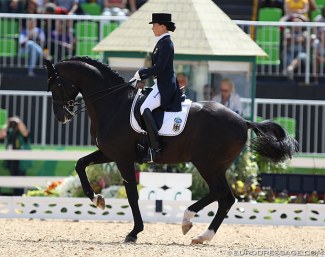 Desperados collapsed and died after his stud duties this morning, 14 February 2020, most likely suffering from an aortic rupture.

Desperados was a 19-year old Hanoverian stallion by De Niro out of Wie Musik (by Wolkenstein II x Matcho AA). He was bred by Herbert Schütt.

Germany's Number One Grand Prix Horse in the Mid 2010s

Desperados was started by Holga Finken and then trained up to Grand Prix level by Falk Rosenbauer before Sprehe took over the ride in 2010.

As a youngster Finken and Desperados won the 2004 Bundeschampionate as a 3-year old and  Kirstin Karlisch steered the black to bronze at the 2005 Bunderschampionate.

Desperados arrived on the FEI scene with a big bang in Hagen. Rosenbauer competed him in the Louisdor Cup qualifier (then called Medien Cup) in 2010 and immediately scored a whopping 75.450%. Just a few weeks later it was announced that Kristina Sprehe had taken over the ride. In 2011 Desperados won the Otto Lorke Prize for best upcoming Grand Prix horse in Germany.

Since 2012 Desperados and Kristine Sprehe were the anchors on the German dressage team at the 2012 Olympic Games (8th in the Kur). They qualified for the 2013 World Cup Final but withdrew from the Grand Prix. At the 2013 European Championships in Herning they were fifth in the Special and Kur.

From 2014 till 2016 they were routiniers on the podium. They won team gold and Grand Prix Special silver at the 2014 World Equestrian Games in Caen, France. At the 2015 European Championships in Aachen they earned team bronze and GPS and Kur silver, although the crowds preferred to have seen him win Kur gold over Charlotte Dujardin and Valegro at the time. At the 2016 Rio Olympics they added team gold and individual bronze to that tally.

In 2017 Desperados was sidelined due to an injury and briefly returned to the competition ring in 2018 with starts at the CDI's in Dortmund, and Hagen. Then it was another half year off to return at the 2018 CDI Frankfurt.

Officially Desperados was not retired from sport, as Sprehe last stated in March 2019, but the stallion struggled with injury and Frankfurt ended up being his last show in December 2018.

Success as a Breeding Stallion

As a 2-year old Desperados was presented for licensing with the Hanoverian Society but rejected by the committee.He became the most expensive, non-licensed stallion at auction and sold for 104,000 euro to Gestut Sprehe.

In 2017 he sired the champion of the South German Stallion licensing. Two times in a row, Desperados presented the champion mares at the Herwart-von-der-Decken show in 2010 and 2011 (Doris Day and Delany). Doris Day became Bundeschampion in Warendorf in 2010.

He received the Grande Prize in 2012. In 2016 he was named Hanoverian Stallion of the Year and was the number 1 ranked horse on the FEI/WBFSH World Dressage Breeding Ranking.