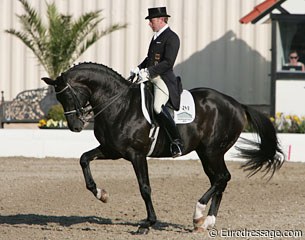 Falk Rosenbauer and the 9-year old Hanoverian stallion Desperados won the first leg of the 2010 Medien Cup show circuit at the CDI Hagen hosted at Hof Kasselmann in Hagen, Germany. The Medien Cup is a special show circuit for young Grand Prix horses between the ages of 8 and 10.

The circuit was founded in 2007 and has become immensely popular with over 40 young horses entered for the first qualifier for the 2010 season. This year the Medien Cup organization boosted its purse by offering a Porche Panamera as grand prize for the 2010 Medien Cup Champion.

"Since Decemeber Desperados has made a huge leap forwards," Rosenbauer commented. "He has much more strength so that I can ask him to do anything with ease."

Finishing second in the Young Grand Prix Horse test were Uta Gräf on the powerful black Holsteiner gelding le Noir. In December 2009, the combination competed in the Nurnberger Burgpokal Finals in Frankfurt and now have made a successful transition to Grand Prix. They received 71,2% from the panel of judges and qualified for the big Medien Cup Finals in Munster 13-15 August 2010. 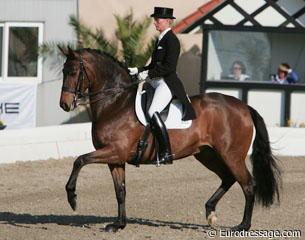 Brigitte Wittig and her 10-year old muscled dark bay mare Biagotti W (by Breitling x Diego xx) slotted in third with 70,95%. This mare is the fourth Wittig bred Breitling offspring that has competed in the Medien Cup in its three-year existence.