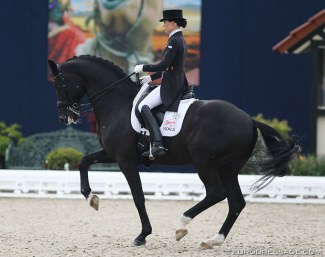 Kristina Bröring-Sprehe and Desperados will not be heading to the 2018 World Equestrian Games in Tryon. The 17-year old Hanoverian stallion is not fit to compete at the 2018 CHIO Aachen, the final mandatory German team selection trial.

Desperados (by De Niro x Wolkenstein II) was a member of the German Olympic Team in 2012 and 2016. After Rio the stallion had almost one year off due to an injury. He made his first public appearance at the Gestut Sprehe Stallion Show in Vechta on Sunday 4 February 2018 and first competed again at the 2018 CDI Dortmund, followed by the 2018 CDI Hagen in April.

Right before the first German WEG team selection trial at the 2018 German Championships in Balve, the black was withdrawn because he reinjured himself.  He has not yet recovered enough to compete in Aachen on 17 - 22 July 2018.

"Unfortunately the time is too short before Aachen for Desperados. I'm very sorry, especially for Kristina," said Klaus Roeser, head of the German selection committee.