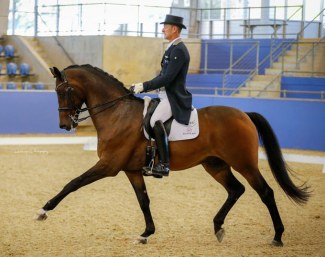 The 12-year old Theodore became ill in mid-June, and after three weeks of intense treatment at the Sydney University Equine Hospital, he passed away. Post-mortem results revealed a cancerous tumour near his right kidney.

Theodore was bred by G. Baggermans in Holland.

He was a formerly licensed stallion, originally named Blue Hors Touch Me. He was first licensed at the 2009 Oldenburg Late Licensing after which he got approved at the 2010 Danish Warmblood Licensing. In 2011 Touch Me sired 44 foals in Denmark. He completed his 35-day stallion performance test in February 2012 and was leased to Finnish Anne Niemi that year.

In 2017 Touch Me/Theodore resurfaced as he had moved to Kittel's yard to be sold. Under his assistant trainer, Swedish Malin Nilsson, the gelding competed in a few tests at S***-level in Germany. The horse was first sold to Bob Price in 2017 as a ride for American Sarah Daehnert, but then resold to Snow in the autumn of 2018.

“We are devastated by the loss of this beautiful horse,” said Snow. “It’s a great shame that Australia will never again get the opportunity to watch Theodore compete. We will remember him always.”