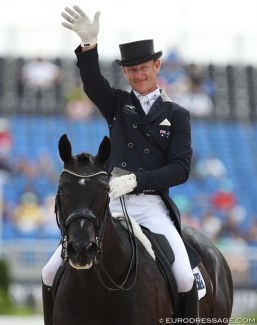 Australian WEG team rider Brett Parbery left the 2018 World Equestrian Games in Tryon without his ride, Susan Duddy's DP Weltmieser. However, the future looks bright for the 2017 Australian Grand Prix champion as his sponsor Terry Snow has stocked up on three future prospects.

Owned by Susan Duddy, the 16-year old Hanoverian gelding DP Weltmieser (by Weltmeyer x Dutch Courage) stayed behind in the U.S.A with Boyd and Silva Martin after the 2018 World Equestrian Games and has been sold as a schoolmaster.

"He has sold to a lovely amateur rider Christina Morin. It’s a bittersweet feeling for his owners and breeders Susie Duddy and her parents Brian and Barbara Marheine," Parbery told Eurodressage. "The Duddy and Marheine families are extremely happy with everything he has achieved throughout his career, however there is sadness because he is the last in a long line of successful horses to come from their Hunter Valley breeding program. He has given his owners so much joy and will be sadly missed. However to know that he is in such great hands with Christina is very comforting. Everybody wishes Christina the very best and look forward to supporting her in future."

Parbery, who relocated his business to Terry Snow's Willinga Park at Bawley Point, Australia, in 2017, will not be away from the limelight for long. Snow has secured no less than three horses for Brett this month.

After traveling around Europe in search of horses, Parbery returned with three new irons in the fire: Fusion de Hus, Theodore, and Spot On.

Rising Grand Prix horse Fusion was at Diederik van Silfhout's barn in The Netherlands. Fusion is a 2010 born KWPN registered gelding by Rubiquil out of keur mare Welkom (by Krack C x Cocktail) and was originally named Hexagon's Fusion. The chestnut was originally owned by Leunis van Lieren in partnership with Stable Zegwaard, but in 2014 Xavier Marie of Haras de Hus in France acquired the gelding as a new ride for Jessica Michel who was looking for a successor for her Olympic ride Riwera de Hus. Michel competed him as "Fusion de Hus" in the 2014 French Young Horse Championships in Saumur and scored bronze. She then reintroduced him to competition in the summer of 2017 and rode him at national M-level. As Marie wants to run a commercial venture at Haras de Hus instead of just sponsoring riders, Fusion was sent to Van Silfhout to be sold.

At Patrik Kittel's yard Parbery found the rising Grand Prix horse Theodore, an 11-year old Dutch warmblood by Tuschinski out of Prencis (by Kennedy). Formerly a licensed stallion known as Blue Hors Touch Me, the bay is now gelding and has been renamed Theodore. Under Swedish Malin Nilsson the gelding competed in a few tests at S***-level in Germany.

In Denmark, Brett found the 5-year old Danish warmblood stallion Spot On (by Sezuan x Solos Carex), who was competed in the Danish young horse classes by Camilla Ahlers Pedersen and Frederico Mexia de Almeida. He was bred and owned by Hansen and Vivi Vang Lauridsen.

"Terry Snow is providing tremendous support in assisting me to try and achieve my goals," said Brett. "At the moment we are based at his magnificent property Willinga Park in Bawley Point where the facilities are just out of this world. I cannot thank Terry enough for entrusting me with such beautiful horses. We are all very excited to be starting this journey alongside such a great man."