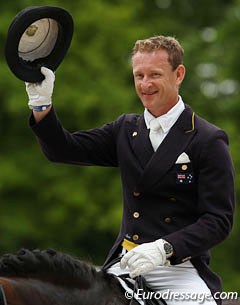 Brett Parbery and his wife Melinda were based at Cedar Lodge in Penrose, NSW, and relocate to Snow's Willinga Park on the South Coast of New South Wales.

Parbery’s early riding includes camp drafting, polocrosse and even rodeo and withmany Australian Dressage Championship titles and a top-ten World Equestrian Games result in 2010 under his belt, he brings to the partnership not only his dressage expertise, but vast experience working with Australian Stock Horses, and a wide network of connections through the international equestrian community.

Parbery will be moving his 11 horses to his new home, including Susan Duddy's DP Weltmeiser, with whom he won the 2017 Australian Grand Prix Championships.

"This is an opportunity to seriously launch Australian dressage into a more competitive program," said Snow. "The partnership ambition is to have regular international judges providing assessments and monitoring performance of Australian horses against the world, and to have European dressage coaches regularly attend the facility. This will also be available to other high-performance riders. We want to work cooperatively in developing our dressage expertise and elevate the Australian standing of dressage in the world, in association with Equestrian Australia.”