Desperados Not Yet Retired from Sport, But Back to Breeding 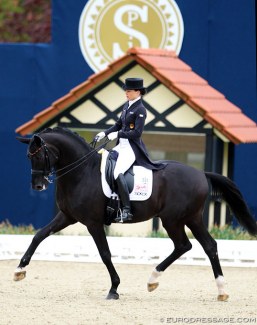 Gestut Sprehe's announcement on Tuesday 19 March 2019 that top stallion Desperados will be available again for fresh semen prompted rumours that the 18-year old Hanoverian stallion has been retired from sport.

Eurodressage went straight to the horse's mouth and asked Kristina Bröring-Sprehe about her plans with her Rio Olympic team gold and individual bronze medal winning horse.

"No, he's not retired from sport," Sprehe told Eurodressage. "He just has breeding duties for a while because the request (for semen) was so large."

2019 will be Desperados ninth year at international Grand Prix level. After the 2016 Rio Olympics he struggled with injury, but made a come back in 2018 at the CDI Dortmund and Hagen. However he was not fit for team selection for the 2018 World Equestrian Games, yet returned to action at the 2018 CDI Frankfurt last December, where he was second in the Grand Prix and won the Special.

Sprehe is bringing along her rising star Destiny OLD, a 10-year old Oldenburger by Desperados x Sandro Hit, which she has shown at two international small tour competition in 2017.

When asked what her show plans are with Desperados in 2019, Kristina remains unsure about an actual schedule though. "We will see after the breeding," Sprehe replied.