Schockemöhle to Pay 10,000 euro to Breeders with Dead WFFS Foal 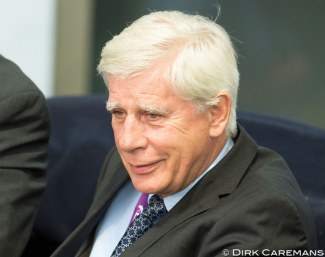 German stallion owner Paul Schockemöhle has made the bold decision to pay 10,000 euro to any breeder who has a foal that died of Warmblood Fragile Foal Syndrome (WFFS).

In the German version of his breeding conditions for 2019 (no mention of it on the English version of the site), a special clause has been added about WFFS. It reads:

"At Lewitz more than 10,000 foals have been born during Paul Schockemohle's activities as a breeder there. The foals of clients are not being counted. Not a single one of those foals had WFFS. The probability is so small. It is so negligibly small that Paul Schockemöhle will pay a compensation of 10,000 euro to any breeder who can scientifically prove via an equine university clinic that his foal died from WFFS."

"This amount is not to be seen as a compensatory damage. It is intended to express that it is completely exaggerated, through the extensive coverage in the media, that we are dealing with a plague here and that stallions who are carriers of WFFS should be excluded from breeding."

This is all that Schockemöhle shares on his position towards WFFS.

Warmblood Fragile Foal Syndrome is an inherited, systemic connective tissue disorder and an autosomal recessive trait. Based on scientific research approximately 10% of the European warmbloods carry this defect. In North America warmbloods are approximately 12% positive.

Mares who are carriers might struggle to get in foal, or if they have a WFFS positive embryo they will resorb or abort. Very rarely a live, affected foal is born. WFFS foals exhibit extreme skin fragility, especially at the joints. The disease cannot be treated or cured and is invariably fatal, typically soon after birth.