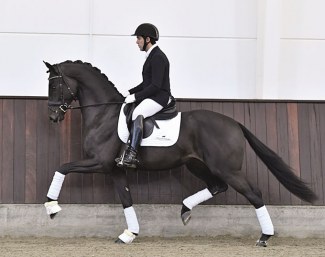 Dodo Weihgand (by Diamond Hit x Furst Romancier x Don Schufro x Sandro Hit) is bred by Christine Arns-Krogman and has Isabell Werth's Weihegold as grand dam. The stallion is owned by Madeleine Winter-Schulze. He was originally named Weihgand, but as he needs to carry a name starting with the first letter of the sire since he was licensed, "Dodo" has been added in front. His positive WFFS carrier status already became known a month ago.

With the updating of the 2019 stallion roster on his official website, Paul Schockemohle revealed the positive carrier status of the licensing champion Global Player (by Grand Galaxy Win T x Don Schufro).

Schockemohle and Helgstrand Collaboration for 2019

Global Player is being offered at stud for the introduction price of 1300 euro in his first season standing at stud. The black is owned by Schockemohle in partnership with Andreas Helgstrand and HH Horses.

The inheritance of WFFS only comes into effect if both stallion and mare are carriers of the WFFS gene! Breeding to a positive stallion (n/ffs) only might have consequences if the mare (n/ffs) is positive too, so breeders are recommend to have their mares tested if they want to breed to a positive stallion. Breeding a carrier (n/ffs) to a non-carrier (n/n), can lead to the foal being a carrier (n/ffs), but only when both parents are carriers, the risk of a foal with actual WFFS is 25% (ffs/ffs). Most mares abort their embryos/foals affected with WFFS. Very rarely is a live, affected foal born.

The Dutch equestrian magazine Horses.nl stated that Global Player's positive WFFS was already rumoured during the licensing in November. At the time Oldenburg breeding director Wolfgang Schulze-Schleppinghoff commented that, "I wish I could talk openly about it, so that we don't have to turn WFFS into something secret and exciting. But unfortunately there are a few stallion owners in Oldenburg who try to stop disclosure of WFFS with all their might."

Schleppinghoff continued: "It's my opinion that you have to be open about and by doing so you take away a lot of the worries. This also counts for the health status on X-ray of the stallions. I would want to be more open about that too. If you just make these things public in all serenity, it will be less inflated."