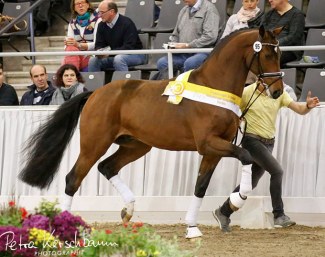 The KWPN bred and licensed sire Vivaldi (by Krack C x Jazz) has stamped the 2018 Hanoverian Stallion Licensing in Verden, Germany, where the licensing verdicts were cast on Friday 26 October 2018.

Ninety-nine stallions were pre-selected to appear at the 2018 Hanoverian Licensing and the licensing committee was generous in their verdict approving no less than 60 of them! Forty-six dressage bred stallions got the green light for breeding, and 14 show jumping bred colts.

The stallions were first presented in hand in walk and trot, then seen jumping in freedom and on the lunge line and finally they were inspected moving in freedom.

Twelve dressage bred stallions were named premium stallion and it stands out that Dutch blood ruled this year's edition of the licensing! No less than six of those 12 premium stallions have Vivaldi blood running through their veins!