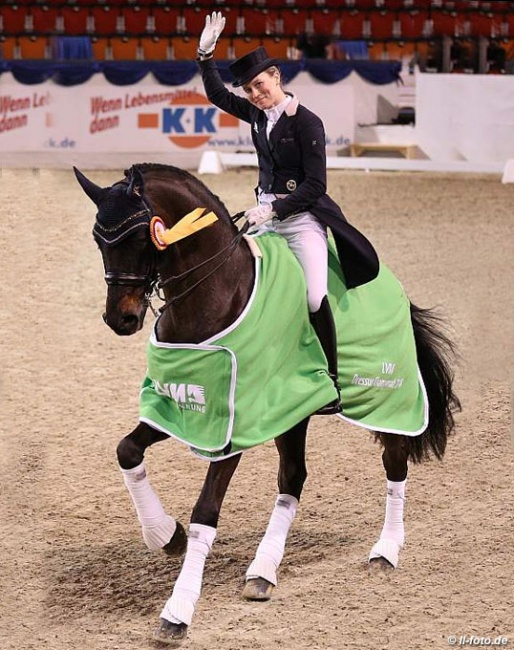 Helen Langehanenberg and Marcus Hermes have taken a strong start at the beginning of the 2018 German show season  with a double victory in the big tour at the 2018 CDN Munster K+K Cup on 12 - 14 January 2018. Twenty-three combinations contested the special tour, dominated by Langehanenberg, while 19 rode the freestyle-tour which was won by Hermes.

The 35-year old Billerbeck based Langehanenberg and Louise Leatherdale's 16-year old Damsey (by Dressage Royal x Ritual) scored 78.08% in the Grand Prix and 79.745% in the Grand Prix Special. The pair was a team gold medal winner at the 2017 European Championships in Gothenburg in August and they have further improved form, to which the judges reciprocated in Munster. Langehanenberg will soon take a break from competition as she is pregnant with her second child.

Dorothee Schneider and her rising Grand Prix horse Faustus, a 10-year old Hanoverian gelding by Falsterbo x Forrest xx, landed second place in the Grand Prix with 75.140%. Anabel Balkenhol and Gestut Webelsgrund's 11-year old Trakehner stallion Heuberger TSF (by Imperio x Michelangelo) were third in the Grand Prix with 74.600%. In the Special Balkenhol was second on 75.882%, while Charlott Maria Schurmann moved into third place on Burlington (by Breitling x Rohdiamant) with 74.765%.

The freestyle tour included the Short Grand and the Kur to Music. Marcus Hermes and the Ahorner family's 11-year old Hanoverian Rovereto (by Rousseau x Wolkenstein II) swept the two classes with 73.884% in the Short Grand Prix and 74.49% in the Kur.  Finnish Emma Kanerva and Gert Saborowski's 12-year old Hanoverian stallion Riverdance (by Rascalino x Alabaster) were second twice with 71.860%. After competing the 13-year old, Swiss bred Hanoverian Bacchus von Worrenberg (by Belissimo M x Calypso II) also local shows in the north of Germany in 2017, Danish Martin Christensen is finally stepping into the spotlight with the former Verden Auction price highlight. They were third in the Short Grand Prix with 70.814% but dropped to 10th place in the freestyle with 70.18%, while Annabel Frenzen and the 11-year old Rhinelander Leolux (by Lord Loxley x Limited Edition) moved into third sport with her 73.03% earning freestyle.

As this was a national event, riders were allowed to carry a whip in the test, which several of the top placed ones did.