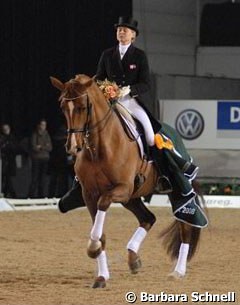 Isabell Werth and Hubertus Schmidt's rides notwithstanding, the CDN in Muenster wasn't a show dominated by big names. But its Grand Prix competitions were still as interesting as they were enjoyable because they presented a whole bunch of promising new youngsters

23-year-old Anna-Katharina Lüttgen had brought two horses to Münster. With Zancor, she qualified for the Special and placed 8th two times. With Duvalier, she went for the freestyle, which she won with almost 74%.

Several Asian riders used Muenster as a test run before their upcoming Olympic qualifier in Cannes. Yuko Kitai and Rambo made several mistakes that cost them dearly, but her light and sensitive riding style was still a joy to watch. She trains with Patrik Kittel. Hiroshi Hoketsu is Japan's most successful dressage rider. Aboard the 12-year-old Hannoverian mare Whisper, he's also doing the World Cup circuit. The two are a harmonious pair and would have done even better in the Grand prix if Whisper hadn't been a tad nervous.

Muenster was a festival of wonderful young horses. The small tour was dominated by Ingrid Klimke and the 8-year-old Damon Hill. Hermann Gösmeier rode the nine-year-old Favourit, owned by the Austrian Jungwirth family, a gelding by Fidermark with wonderful elasticism. 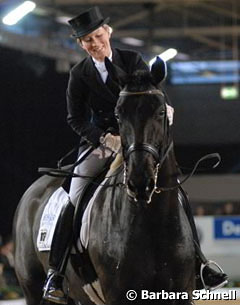 In 2006, Responsible and Helen Langehanenberg were among the top three pairs in the Nürnberger Burgpokal finals. Now they've successfully - and very gracefully -- made the transition into the Grand Prix league. Helen was overjoyed when they placed fifth in the Grand Prix and fourth in the Special.

Lone Jörgensen presented Donna Asana, an eight-year old mare by Don Schufro owned by herself. The horse moves beautifully and is a wonderful match for Lone -- who knew where to stop with such a young horse and did not ride the freestyle itself but only this one brief tryout. Hearts went out to the overjoyed rider during the prize-giving ceremony.