Photo Report: Werth and Kittel In Front at the 2012 CDN Munster 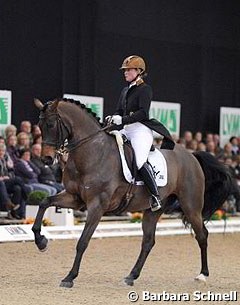 German Isabell Werth and Swedish Patrik Kittel grabbed the first place twice in the big tour classes at the national dressage competition in Munster, Germany on 13 - 15 January 2012. Werth and her Hanoverian gelding Don Johnson led the Special tour while Kittel and the Dutch warmblood Silvano were in front in the Kur tour.

"Don Johnson has as much beat in his blood as in Jan Delay's song Oh Johnny," Isabel Werth commented. "My little chaotic horse made me so much joy in Frankfurt and now he went really well at the traditional K+K Cup in Munster. Both in the Grand Prix and Special he did good rounds and proved that this talented rascal is growing into a real athlete. I can't complain about two starts and two victories. I'm sure that we're still at the beginning of the road. Don Johnson has so much expression and elasticity so it's always fun to work with him." 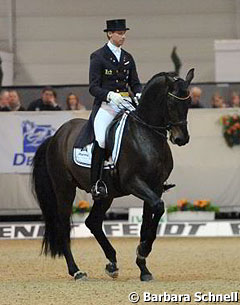 Kittel and Edwin Kohl's 13-year old Dutch warmblood stallion Silvano (by Rubinstein x Cocktail) topped the leaderboard in the Grand Prix with 71.721 % and continued to win the freestyle to music with 79.65%. In the Kur the duo placed well ahead of Ingrid Klimke on the Oplander family's 10-year old Hanoverian Liostro (by Le Primeur x Wenzel), who ended in second place with 74.95%. Christoph Koschel and his rising Grand Prix horse Rostropowitsch finished third twice with 70.605% and 74.94%.

"Silvano was a star, winning both the Short Grand Prix and the Kur," said Patrik Kittel. "With a score of nearly 80 percent in the Kur, Silvano is becoming  secure in the Grand Prix, and felt very good throughout the test. It is always nice to have happy owners, and Arlette and Ed where extremely happy with their Silvano."