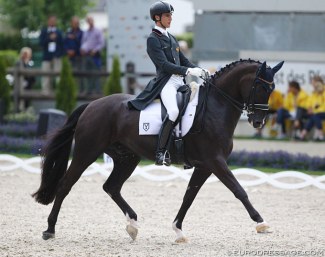 "I'm so thankful and I feel fortunate for the many years I have been able to work with Dhannie Ymas," said Juan Matute Guimon. "We have shared so many, many special experiences together. He has been a very special partner for me and even though he has a new rider, he will always be my champion."

Dhannie is an 11-year old Hanoverian gelding by Don Crusador x Weltmeyer. He is bred by Hinrich Engelke in Germany.

Under junior rider Juan Matute Guimon, Dhannie won the Kur gold medal at the 2015 European Junior Riders Championships in Vidauban, France. The pair went on to win all small tour classes at the 2016 CDIO Wellington Nations' Cup. In 2017 the black gelding did his first Grand Prix classes in the Under 25 division.

Dhannie will now continue his sport career as a schoolmaster under  rising 17-year old junior rider Natalia Bacariza Danguillecourt. She has represented Spain at the 2016 European Junior Riders Championships in Oliva Nova with Zoef. In 2017 she competed both Zoef and Rihanna at international junior riders level in Wellington, Florida, and Europe.

"I wish Natalie and Dhannie a very special journey and I hope that Dhannie Ymas can give her the wings thathe once gave to me in order to reach my dreams," Juan added.