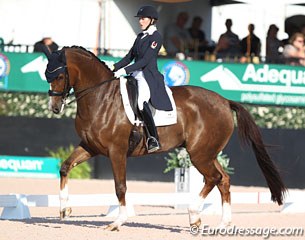 Veteran and up-and-coming Canadian dressage athletes are set to compete against elite dressage athletes from around the world in a unique, team-based setting during the CDIO 3* - CDIO-U25 Nations Cup at the Global Dressage Festival, taking place March 21-25, 2017 in Wellington, FL.

The CDIO 3* Nations Cup provides an exciting opportunity for top competitors from around the world to compete as a team and represent their country on the world stage. New for 2017 is that Wellington will also host a CDIO-U25 Nations Cup, giving next generation athletes the chance to gain valuable experience in the team format.

Canada will be represented in the CDIO 3* Nations Cup by the following rider/horse combinations:

The reserve combinations will be Lane and an additional mount, San d’Or, Jill Irving from Moncton, NB and Degas, Diane Creech of Caistor Centre, ON and Robbie W, and Lindsay Kellock of Toronto, ON and Royal Prinz.

In the CDIO-U25 Nations Cup, the following horse/rider combinations will compete for Canada:

The Canadian teams will be supported by Chef d’Équipe, Liz Steacie.

Canada has traditionally excelled in this event, bringing home team silver in 2016, and fielding two teams in 2015 to claim silver and bronze. Canadians have also picked up four individual medals since 2013, including bronze for Belinda Trussell in 2016 and gold for Christilot Boylen in 2013.