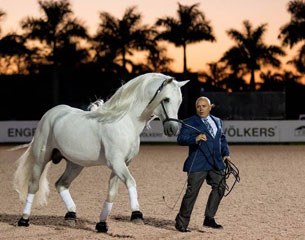 Every year, during the third week of Adequan Global Dressage Festival in Wellington, USPRE Week holds its week. This year the event took place during 24 - 29 January 2017. A week full of activities dedicated to the PRE-which purpose is to promote this breed in the United States.

Continuing with the agenda, two activities were held on Wednesday morning. The first one was a seminar about the PRE Handbook. Tanya Duffey, executive director of USPRE, answered questions about inscriptions and revisions. The second activity was a round table hosted by representatives from the Breeder Executive Committee. Bill Taylor (USPRE Board Member and Breeder of Xavier Farms), Miguel Nuñez (Vice-President of USPRE and Breeder of Yeguada Miguel Nuñez), Lucinda Striker (PRE Horse Handler) and Debra C. Phelon (USPRE Board Member and Breeder of Solitude Andalusians LLC) participated in the panel. The debate revolved around two central themes; the American Market and Sport. The attendees gave their perspectives which concluded emphasizing the importance of focusing the sales of the PRE in the sport.

On Wednesday night was the big event of the week; which is the USPRE Party. The theme in this edition was Gran Prix. With a plenty occupancy in the Adequan Global Dressage tent, about 800 people, among the guests were Mr. Juan Tirado and Mr. Manolo González, President of ANCCE and Executive Secretary of ANCCE respectively. Under the lights of the Stadium, the first exhibition of the night was “el taconeo” of the shoes and the movement of the Spanish fan with the rhythm of the music, Xavier Garcia, the singer of Opera, sang the famous song of IL TROBADOR next to flamenco “bailaoras”. Around this performance, a total of nine PRE-stallions (Abanico XVIII BRH, Vaquero HGF, Grandioso III, Conocido HGF, Presumido CV, Bolero CXLVIII, Charmas, Legend and Encanto IX) paraded showing their beauty, majesty and nobility that characterizes this bred. Tom Reed and Sebastián Bastida, the handlers, presented Encanto XI and Grandioso HGF by hand. 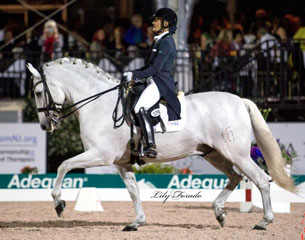 Throughout the night, the public witnessed several dressage exhibitions, the first one was Nicolas Fyffe along with Grandioso III’s son, Fiero HGF, the young American Kerrigan Gluch with HGF Brio among others. One of the highlights of the night was the dressage PRE mares, starting with Maria Lithander on Barbara XXXIV who performed a Freestyle with the music of Wings by Little Mix. Subsequently, a total of four mares were in the arena showing their gaits. With a total of seven acts, Pas de Deux Black and White composed by Emily Copeland with Folero and Elena Schiefele with Baroco HGF highlighted the contrast of the plurality of the PRE color coats. Last but not least, the experienced Janne Rumbough perfomed the last exhibition with Armas Zumbel. The following act was a set of riders who closed the USPRE Party night with a final ride; Nicole Pelfresne with Lentisco, Sophia Schults with Idolo Americano, Wendy Inch with Presumido CIV, Emilie Laval with Abanico XVIII BRH, Jaime Amian with Legend, Linda Swande with Flamenco YM, Amina Bursese with Fiti AL, Diego Gonzalez with Mejicano CIII, Gee Wierichs with Ruidoso BOT and Maria Lithander with Iluso. The dinner was provided by Chef Frederic Boyer, who once again prepared his menu based on Spanish traditions, such as Paella, Russian salad, Iberian ham and the famous drink, Sangria which flew away.

On Thursday, during the GPS lunch break, Federico Leon Nieto, veterinarian of Grandioso III, held a seminar. The activity focused on the concerns that a vet may have with a high level competition PRE. He explained the possible solutions from a preventive and therapeutic way. At dawn, USPRE members gathered for an elegant dinner at the Palm Beach International Polo Club. The dinner brought together more than 70 members. Juan Tirado gave a brief speech highlighting the great work that USPRE does in promoting the breed in the United States. Once the dinner was over, special prizes were awarded and presented to its members. The awards included member of the Year, Breeder of the Year, Equestrian of the Year, Horse and Rider of the Year, Mare of the Year, Stallion of the Year and Functionality Award. The award winners will be published soon on the usprea.com website. 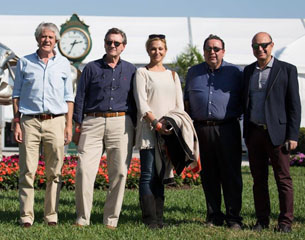 On Friday, Sebastián Bastida and Doina Fischer were hosts for two seminars. At 9:00 AM, at the premises of Hampton Green Farm, Doina Fisher and Carmen Franco gave a theoretical lesson on Working Equitation, an equestrian discipline of Iberian horses that is breaking the American circuit. Once the theory section was over, Doina Fisher demostrated several exercises with obstacles to forty-five attendees. At the same time, at MTICA Farm, the experienced Sebastián Bastida, famous handler with multiple awards, explained the most important points to present a horse to a TRC. These included neck position, perfect squared stop, over track of the stride on both gaits (walk and trot) and the straightness among others.

USPRE from the beginning has been one of the founding sponsors of Adequan Global Dressage Festival. As a weekly sponsor of the AGDF 3, (Grand Prix and Freestyle events), during the break on Friday night, a farewell was dedicated to Grandioso III. José Daniel Martin Dockx delighted the audience with his freestyle. The winner of the freestyle “Under the Lights” was the Olympic rider Laura Graves along with Verdades with an average of 80.728%. As a great novelty, the last activity scheduled for the week, was a Grand Prix master class given by José Daniel Martín Dockx along Grand Prix horse Bolero CLXVII. The master class was given during the break of Grand Prix Special in AGDF on Saturday.

This edition of USPRE Week brought together a lot of PRE lovers. A magical week where the beauty, strength, quality and nobility of these magnificent horses has been the epicenter of the equestrian capital by excellence.

Check out a gallery of photos of the 2017 USPRE week here.