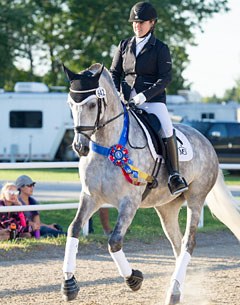 The United States PRE Association (USPRE) is pleased to announce this year’s winners of its annual Breeder’s Cup for FEI-level PRE competitors, the 2016 Copa USPRE. The Copa USPRE is an annual competition for FEI-level horses and riders, who compete across the United States at their declared level for a national ranking among other Copa participants.

The criteria for this program demand six scores in each level, with a minimum score of 62%. Winners of the Copa USPRE are invited to compete at the SICAB World Championship for PRE Horses in Sevilla, Spain along with the top-ranked horses of the Copa ANCCE. These pairs also constitute the 2017 USPRE Dressage Team, and receive show pads, clothing and press during the coming year of competition.

Our Grand Prix Champion and Reserve Champion are well-known to the Florida circuits. Jacqueline Cuddy and Malcarat debuted at Grand Prix just last year, and quickly rose to scores close to 70% in their first few outings together. Since then, they have polished a fancy freestyle which is bringing home even bigger scores. The pair have just received permission to compete for Great Britain in the international shows this coming year. As Reserves, Janne Rumbough and Junior are an experienced pair with a number of national USDF Championship titles under their belts. 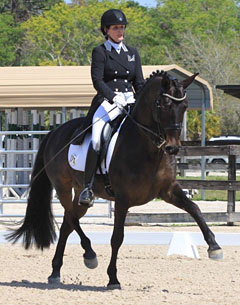 In the Small Tour, it’s Janne Rumbough again, this time with her new mount Armas Zumbel. This horse took his former rider to many Small Tour championships in Spain, and is now doing the same for Janne. The pair have matured well this past year, topping a huge PSG and Inter I level at the Region 3 Championships in Atlanta, and Janne reports that Zum-Zum is capable of much more. Following close behind is Barbro Ask-Upmark in California, with her impressive Orive YET. This pair continues to improve, with scores that progress higher as the horse moves up the levels.

The winners of the FEI 5 Year Old division both received very respectable Young Horse scores, against warmblood-dominated competition. Nicole Harrington is campaigning the lovely mare Camomila MCD and consisting receiving marks above 73%. Similarly, Gee Wierichs and Rudioso BOT have demonstrated the potential of a well-bred PRE with exceptional gaits and temperament.

Finally, in our Youth Division, 19 year old Kerrigan Gluch and Vaquero HGF represented the United States in Europe this past summer in two international Young Rider contests, as part of the USEF Young Rider Euro Tour. At the Future Champions Show in Hagen, Germany, Kerrigan and Vaquero were the top-scoring American pair, placing in the ribbons in the Individual Test.

In addition to our clear winners this past season, a number of our former Copa winners moved their horses up to new levels, most notably to Grand Prix. Although they were unable in this first year at the level to meet the minimum number of scores to qualify for the Copa, these pairs are achieving important results and are ones to watch for the future:

USPRE wants to congratulate its Copa Winners, thank them for their hard work and wish them the best of luck in 2017! USPRE looks forward to hearing more success stories in the near future!

Related Links
Katie Hoefs-Martin and Barbro Ask-Upmark are the 2016 USPRE CA High Point Grand Champions
USPRE Announces Winners of the First Copa USPRE
2016 USPRE Tribunal for Qualified Breeding Stock is on the Calendar
Join the P.R.E. Community by Subscribing to the USPRE Catalog of Breeders and Breeding Stock