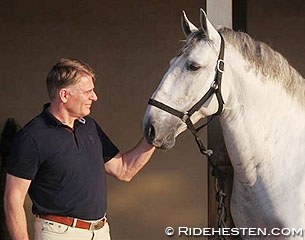 At the 2014 WBFSH general assembly of the World Breeding Federation for Sport Horses (WBFSH) in Brazil in December, president Jan Pedersen adddressed the assembly. This is a summary of the written report that was published in the Minutes of the GA.

“The last couple of years I have touched on the global financial crises that we have experienced since 2008. Last year I felt sure that we had reached the bottom that the long climb towards the quantitative level of former times would at least start this year. I do not think that has been the case. Not many studbooks have experienced a clear increase in the number of coverings and foals born.

Maybe we did reach the bottom last year but I do not think that we have started the climb yet. So, for many studbooks it is still difficult to hang in there. However, there are small indications that the market for horses is getting better. A closer co-operation between sport and breeding is still an important goal to us and we have purposely been pursuing that goal in 2014. The Executive Committee and I have had several meetings with the FEI Secretary General and among other things we have been discussing a so-called Memorandum of Understanding, which is going to be the framework of our future co-operation. We are planning to create a WBFSH / FEI Council. This council shall identify current problems, and suggest solutions.

The FEI World Breeding Championships for Young Dressage Horses were held in August in Verden and the organization was like always perfect. For the first time a class for 7- and 8-year-old horses which have competed in former finals of these championships was carried out. The number of horses in the class was small but the quality was high and showed a clear correlation between the young horses and the horses competing at a higher level. In my opinion the initiative was a clear success and should be repeated.

During the championship in Verden Klaus Miesner, Trond Asmyr, FEI director of dressage and I met with different people from the dressage scene to discuss the way these championships are being judged. The question was if the judges should look for the best performance of the day or the most shining talent. The discussion was interesting and it will be continued.

The atmosphere in Verden is always special and good, but this year of course slightly influenced by the decision to relocate the event to Ermelo in Holland from 2016 to 2018. It was a great disappointment to the organizers but there are no bad feelings. I have seen the show ground of Ermelo which is also very nice and suitable for this event.

The Championships for Young Jumping Horses at Zangersheide were as spectacular as always - characterized by good, exiting sport, an efficient organization and a fantastic showground. It does not get much better.

In his presentation yesterday, Paul Hubert established the fact that there is a high correlation between the championships in Lion d’Angers and later success at the highest level in eventing. As far as I was informed this year’s championships were again very successful.

We have a good co-operation with especially Dr. Füssel, Deputy Head of Unit DG Sanco. The WBFSH is heard in Brussels. There are several examples of that. The changes we asked for regarding requirements for stallions and insemination centers were adopted by the Commission and the new rules came into force a month ago. This is a great victory for us.

Another example was the plans of the EU Commission to take away the right of the studbooks to issue passports. Our intervention prevented this from happening.

The establishment of an efficient and secure data exchange system still has high priority but it has been and is very difficult to get the project off the launching pad. The studbooks are not that hooked on the idea as long as the FEI does not join in and the FEI does not want to get involved before the major studbooks are on board. So this is really difficult. In the meantime we have been discussing other solutions than the HUB. In April we had a meeting with the people behind the system "Hippomundo" and later today we are going to hear a presentation on data exchange by the company Delta Horses. However, no matter which system we choose we must choose quickly. The project is important.

In spite of the hard times the WBFSH is luckily still growing. This year, five applications have been assessed by the Development Department and subsequently discussed by the Board and the Executive Committee. Jim Flanagan will set out our views on the applications later today.

Later today Rik Van Miert can present a satisfactory financial report. The accounts show a profit of EUR 33,000 which to some extend is due to the EUR 100,000 sponsorship from Jaeger-LeCoultre but it is also very positive that all outstanding membership fees from the year 2012 and 2013 have been paid. That is a sign of good health the way I see it.”