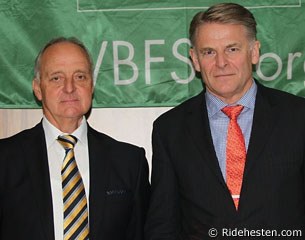 At the 2013 General Assembly of the World Breeding Federation for Sport Horses, Danish Jan Pedersen has been re-elected president of the WBFSH for another two year period.

The president expressed his gratitude and accepted the re-election. He is looking forward to his eighth two-year-period as president of WBFSH.

Vice-president, Belgian Rik van Miert, was re-elected on the Board. Philippe Lemaistre, France, was elected on the Audit Committee as Håkon Wallmann, Finland, did not wish to be re-elected.