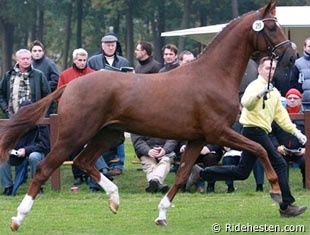 The 2009 Hanoverian Stallion Licensing featured an interesting crop of young stallions, but this year there were no real earth-shattering highlights. The collection of colts include several very nice promising stallions which did sell for top prices at auction.

The price highlight of the auction following the licensing was Feuerspiel (by Fidertanz x De Niro), bred by Thomas Heuer. Following a strong bidding duel with the American Doug Leatherdale, the Dutch Geert Brenninkmeijer paid the top knock down price of 330,000 euro for this stallion. The stallion will stand at stud at Klosterhof Medingen.

The Danone offspring Don Deluxe MJ sold for a staggering 320,000 euro to Marianne Jerich in Austria. The top-priced jumper stallion Laith (by Lord Z x Weinberg) was purchased for 200,000 euro on behalf of a customer from Dubai.

Euro 64,826 was the average price achieved at the stallion sales. 20 of the 46 licensed Hanoverian stallions will leave Germany. Apart from Austria (four stallions), there were lots of customers from Spain, the United States, Belgium, Russia and Norway. Not only German private stallion owners purchased young stallions for their service stations, but also three German National State Studs.

“We saw lots of powerful young stallions, selected according to strict performance criteria,” breeding manager Dr. Werner Schade sums up the three-day-event that attracted spectators from all over the world

The auction on non-licensed stallions was also satisfactory. 42 Hanoverian horses were sold at an average of 19,750 euro. Top-priced horse was a dark bay son Sean Connery (by Sir Donnerhall x Rotspon) purchased by an approved training and show stable in Lodbergen, Lower Saxony for 195,000 euro.