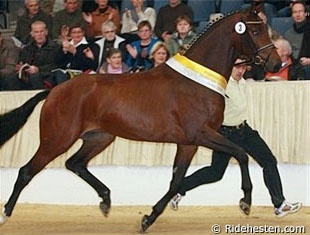 Even though the Hanoverian Verband did not to nominate a "licensing champion" at the 2008 Hanoverian stallion licensing, it was obvious that the most interest and praise went to the dark bay Belissimo M x Weltmeyer colt which sold at auction for the highest price.

Blue Hors Stud and Paul Schockemohle again made a partnership (like they did with Hotline) to acquire the bay stallion (stallion name: Blue Hors Bentley) for 310,000 euro. Others claimed that the Danone I and II fullbrother (by De Niro x Weltmeyer) was the highlight of the collection. Schockemohle bought this stallion for 130,000 euro. 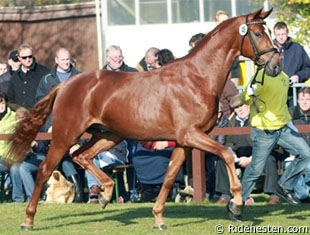 Many viewers in the audience disagreed with the licensing committee, as the Lauries Crusador offspring, for instance, lacked movement. The committee appeared to have been influenced by commercial interest instead of selecting and honouring quality in movement. The disagreement between the committee and the stallion buyers was very obvious in the prices that were generated during the auction. Some premium and licensed stallions sold for relatively lower prices than some non-licensed and non-premium stallions.

Dr. Werner Schade, head of the stallion selection committe, confirmed that many stallions sold in Germany. The Niedersachsische Landgestut acquired three and Landgestut Moritzburg and Prussendorf both purchased one stallion. 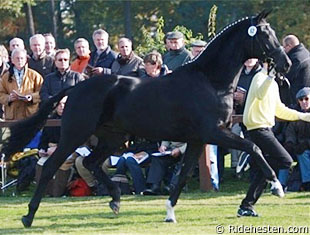 Danish customers were eager to invest and bought five. One of the public's favourites, the premium stallion by Stedinger x De Niro, sold to the Danish/Norwegian syndicate of Tailormade Horses for 110,000 euro. The Swedish horse dealer Johan Ifversen purchased the Florestan x Wolkenstein offspring for 170,000 euro. The Rascalino x Londonderry offspring sold for 100,000 euro to Dr. Ole Jorgen Jorgentvedt from Norway. The average price for a licensed stallion was 53,760 euro.

The 43 non-licensed stallions achieved an average price of 18,360 euro and the highlight was the Rousseau x Del Piero, which sold for 80,000 euro.