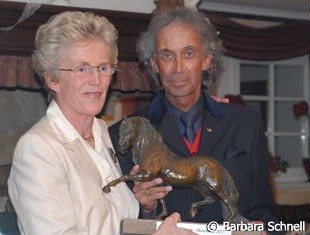 Madeleine Winter-Schulze and Christoph Hess were the recipients of the Reiter Forum Award, presented by Frank Henning on Monday April 16, 2007. The award ceremony took place at the private house of Ullrich Kasselmann at Hof Kasselmann in Hagen

, Germany, and was attended by the entire German Who's Who.

Winter-Schulze was honoured for being the long-time sponsor of World Champion Isabell Werth and of German team jumping rider Ludger Beerbaum. She received a standing ovation at the presentation. Madeleine was moved to tears because, "she received this award for something that gives so much back to me every single day."

Team rider Heike Kemmer took the microphone and spoke about how much she owed to Winter-Schulze as well. "I've had so much bad luck with my horses these past few years - one had to be put down - and I was contemplating to quit riding. In that phase, it was Madeleine who pushed me onwards by offering me a horse to ride and by believing in me. Her willingness to help and dedication are extraordinary," Kemmer said. 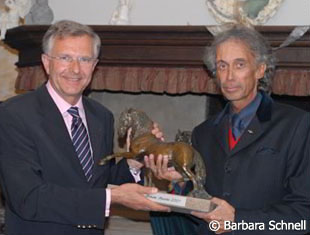 Christoph Hess, director of the training department of the German Equestrian Federation, also received the Reiter Forum Award. He was honoured for laying the foundation for the successful seminar series "Better Riding". "I accept this award in representation of all the trainers who dedicate their lives to the equestrian sport 365 days a year," Hess said.

Eurodressage correspondent Barbara Schnell was on the scene and took some more photos of this very exclusive evening at Hof Kasselmann.