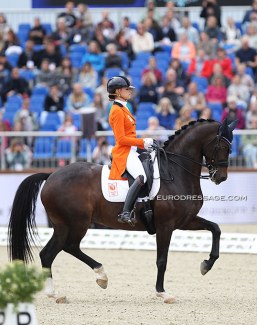 Haute Couture, Dinja van Liere's Dutch team horse at the 2021 European Dressage Championships, has been sold to the U.S.A. for Katherine Bateson-Chandler to ride.

Haute Couture is a 9-year old KWPN mare by Connaisseur out of Destiney (by Krack C x Jazz). She was bred and owned by Joop van Uytert in partnership with Albert Drost in The Netherlands.

The bay mare was produced to Grand Prix level by Dinja van Liere and was a stand-out horse from the start.

Her first claim to fame came in 2017 when she began the year by winning the Horsefood Talent 2017 in Berkel-Enschot and then moving on to win the Pavo Cup finals ahead of Total U.S. as a 5-year old. At the 2017 World Young Horse Championships in Ermelo, she was 10th in the finals.

In 2018 she was third at the Pavo Cup Finals, this time bested by Total U.S., but the pair was only selected as second reserve for the 2018 World Young Horse Championships in Ermelo.

In 2019 as a 7-year old she was back on the Dutch team for the World Young Horse Championships in Ermelo and was 8th in the Finals.

In 2021 Haute Couture made her Grand Prix debut, first at the national show in Tolbert, followed by De Meern, and then the international debut in Hagen, where she scored a double 72%. A month later in Munich the score rose to 74% in the GP Special and the horse became noticed by the Dutch team selectors.

Van Liere was selected to go to 2021 Olympic Games in Tokyo with her other horse Hermes, but due to an administrative erorr and negligence concerning ownership registration with the FEI, Hermes was not eligible to go. Haute Couture travelled to Tokyo as reserve horse.

The mare got her moment to shine on the Dutch team at the 2021 European Dressage Championships in Hagen, where she became the best performing Dutch team horse. They placed 10th in the Kur finals with 79.668%, their last show together

Haute Couture had already been for sale since the spring of 2021 and it was already a surprise that she went to Tokyo as a reserve horse. However, van Uytert and Drost made a deal to keep her through the summer.

She has now been sold to Jennifer Huber as a WEG team hopeful for her coach, Katherine Bateson-Chandler. This is the second time that Bateson gets a unique opportunity with a ready-made Grand Prix horse bought for her in a WEG year. In 2010 sponsor Jane Forbes Clark purchased Nartan from Jeannette Haazen and Bateson rode it on the U.S. team at the 2010 WEG in Kentucky, where the team was fourth and she placed 19th in the Special.

Dressage-News.com broke the news that Haute Couture sold to the U.S.A. The mare will arrive in Wellington, Florida, mid December.

"Feeling like the luckiest girl in the world! Gulp…… can’t wait to get started on this new journey with Jen Huber! Here’s to a fun future," Bateson stated shortly after the news broke.

This is the second proven Grand Prix horse that an American has bought in the lead-up to the 2022 WEG. Anna Buffini purchased Fiontini in October.

A month ago Huber also bought Anna Zibrandtsen's Shakira (by Sommerlier x Sir Donnerhall) in Denmark for herself to ride under the supervision of Bateson.