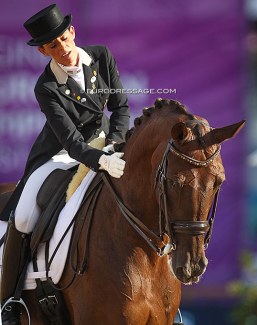 Hungarian Grand Prix rider Aniko Losonczy had to say goodbye to her recently retired team ride Mystery. The mare sustained an injury in her box at a German equine clinic and could not be saved.

Mystery was an 18-year old Hanoverian mare by Margue H out of Daliah (by Delano). She was bred by Ludowieka Haspecker.

Owned by Andrzej Salacki, the liver chestnut mare was developed to Grand Prix level by Zaneta Skowronska in Poland.

The pair represented Poland at the 2014 World Equestrian Games in Caen and 2015 European Championships in Aachen.

In 2016 the mare moved to horse dealer Arnold Winter at Neu-Anspach and was shown in Germany by Jennifer Schön between March and May 2016. Skowronska was back on board fin the summer of 2016 for the 2016 CDI-W's in Brno and Augustowek.

In February 2017 Hungarian Aniko Losonczy purchased the mare as her new Grand Prix ride and in an effort to write history for her country by qualifying a complete team for the 2017 European Dressage Championships in Gothenburg.

Losonczy and Mystery pulled it off and joined Robert Acs and Nikolett Salai on a team of three riders in Gothenburg, where the team was 14th and the pair 52nd with 64.671% in the Grand Prix.

The pair did only one CDI in 2018 (Brno) and in 2019 they competed at two shows, Mariakalnok, and Lipica, but they were disqualified at the later event due to a controlled medication case.

In June 2020 Losonczy retired Mystery from competition at the CDI Mariakalnok, the tirst international show on 26 - 28 June 2020 after the first corona lockdown.

Losonczy had planned on breeding Mystery and the mare was transported to an equine clinic in Münster, Germany to be covered. On 18 July she sustained an injury there.

"They found her in the box on three legs, but she was not in stress and ate normally," Losonczy told Eurodressage. "We thought it wasn't so worse, but when they did X-rays they saw it was terrible. She had fractured her pastern in eight placed. I had hoped for a miracle that an operation could help her to have a nice life afterwards."

Unfortunately it was not meant to be and on Tuesday 20 July it was decided in the best interest of the horse to put her to sleep.