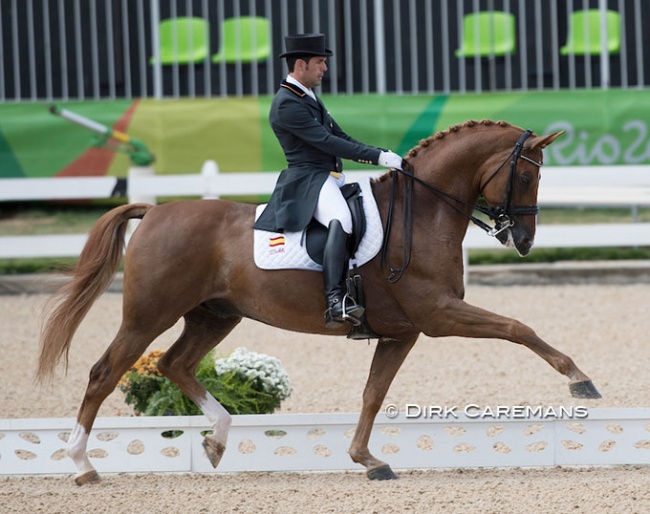 Lorenzo, the Danish warmblood gelding that took Spaniard Severo Jurado Lopez to Olympic glory in rio 2016, has been listed as a potential horse for the Tokyo Games for Swedish Jeanna Hogberg.

Lorenzo is a 15-year old Bavarian warmblood by Lord Loxley out of Bologna (by Rubin Royal). He is bred by Martin Niedermair in Germany/

Lorenzo sold to the Danish couple Kirsten and Jorn Elkjaer-Holm as a 3-year old.

Lorenzo was then sent to Andreas Helgstrand to be sold.

Under stable jockey Severo Jurado Lopez, he made his Grand Prix debut in November 2015. Their international show debut followed in February 2016 at the CDI Vestfold. They made a major splash at the CDIO Aachen where they became the crowd favourites in the freestyle and finished fourth with 83.350%. At the 2016 Rio Olympic Games they finished fifth in the Kur to Music with 83.625%.

After Rio, the pair competed at the CDI-W's in Odense and Salzburg, but they lost their groove at the CDI-W in Amsterdam, where the horse finished 10th in the Grand Prix and got eliminated from the freestyle.

In May 2017, Danish born American Charlotte Jorst acquired Lorenzo as her Tokyo hopeful.

Charlotte had planned her show debut on Lorenzo at the 2017 CDN Del Mar on 7 - 8 October 2017 but scratched because the horse had a reaction to a spider bite. At the end of October, however, he was diagnosed with a hoof related injury that has kept him from sport ever since.

In October 2018 Lorenzo returned to Europe to rehabilitate at Helgstrand. In June 2020 Eurodressage caught up with Jorst who said Lorenzo would return to sport in the autumn of 2020.

Since December 2019, the FEI database no longer lists Charlotte Jorst's company Kastel Denmark as owner of the horse, but Helgstrand Dressage in combination with Severo Jurado Lopez. FEI ownership often has does not reflect real ownership and Jorst continues to be the true owner of the horse.

In the spring of 2020 Jurado Lopez left Helgstrand to set up his own shop, but remarkably on 2 December 2020 his involvement with the horse was reconfirmed in the FEI database. For Olympic selection the horse needs to be partly owned by the rider in order for the rider to represent his/her country at the Olympics.

French dressage website dressprod.com pointed out that on 14 January 2021, however, Jurado Lopez' name was removed from the FEI database and replaced by Jeanna Hogberg (Sweden). In addition Charlotte Jorst (USA) is listed again as o-owner, creating several possible routes for Olympics participation

"It would be great if that could work," Jorst told Eurodressage about Jeanna having a potential Olympic horse in Lorenzo. "We are hopeful that he will be fit and that there will be qualifiers for her to go to. She started riding him about a month ago and is working on getting him fit. She is riding him full time now."

When asked if she doesn't want to ride Lorenzo herself, Charlotte replied, "I have Nintendo!"