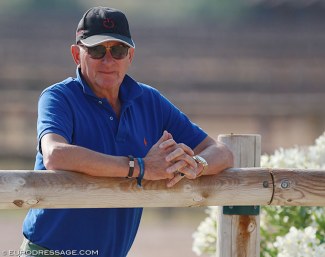 For German horse dealer Jochen Arl the United States has always been the land of opportunity. American horse owners, riders and trainers are passionate and committed about reaching the top of U.S. horse sport and find their way to Europe to acquire the best of the best.

More than forty years in the business of matching riders to talented horses, Jochen prides himself in having no less than nine of "his" horses competing at the highest echelons of American dressage sport, at the moment

The Belgian based Arl began operating as a horse dealer in the 1980s and made his introduction onto the U.S. horse scene in 1995, when managed his first major American deal brokering the sale of the licensed Grand Prix stallion Contango to Mary Alice Malone's Iron Spring Farm.

The Oldenburg bred Contango (by Contender x Kronprinz) sold in 1993 to the Dutch duo Nol Gerritse and Frans Koeman and was trained to Grand Prix level. Jochen then brokered the sale of the 7-year old licensed stallion to Malone.

Making Their Mark at the CDI-W Thermal

Fast forward forty years later: Jochen has built a tightly knit network of clients on both the East and West Coast.  The results achieved at the most recent, back-to-back international competition "Desert Dressage" in Thermal, California, from 13 till 23 November 2020 are a testimony to his vision and ability to find some of Europe's nicest horses for an American clientele.

Rising star Benjamin Ebeling scooped up five trophies in all five Under 25 classes he rode in Thermal. Aboard the 12-year old Belgian warmblood Illuster van de Kampert (by Spielberg x Contango), which Jochen sold to the U.S.A. in the spring of 2016, Ebeling scored winning marks up to 73.955%

In Thermal the 31-year old Dawn White-O' Connor made her international small tour debut aboard Akiko Yamazaki's 8-year old KWPN gelding Hudson M (by Cadans M x Tuschinski). Sold by Jochen to Yamazaki's Four Winds Farm in March of this year, the bay gelding competed in his third CDI in his life and first on American soil. They were 5th in the Prix St Georges with 67.353% and second in the Intermediaire I with 69.412%. The pair also competed in two national Test of Choice classes, scoring a winning 76.176% in the Prix St Georges and winning 72.794% in the Inter I.

The 16-year old Hanoverian gelding Don Antonio (by Don Frederico x A Jungle Prince), sold to the U.S.A in 2016, is proving to be a valuable Grand Prix schoolmaster to 52-year old Tina Caldwell, who is gaining mileage with the bay at her third CDI in her career in Thermal.

One of Jochen's most loyal partners is none other than Akiko Yamazaki, long-time sponsor of U.S. Olympian Steffen Peters. Yamazaki and Arl first struck gold when Jochen sourced Rosamunde as Steffen's successor for Olympic ride Ravel. The mare ended up winning 30 international dressage classes and represented the U.S.A. at the 2017 World Cup Finals in Omaha.

Akiko is a highly accomplished Grand Prix rider in her own right and is supporting her two rising dressage daughters, Miki and Emi, along the way. Since Rosamunde, Jochen has been supplying Akiko with a steady stream of outstanding dressage talent.

Arl has a long standing training collaboration with Portuguese Grand Prix rider Maria Paes do Amaral, who prepared three of these sales horses - Illuster van de Kampert, Don Antonio, and Gronskovlunds Romeeo - before their departure to the United States.

Also on the East Coast of America horses sold by Jochen have proven their worth for U.S. dressage sport.

Prime example is of course Betsy Juliano's Salvino (by Sandro Hit x Donnerhall), who with Adrienne Lyle has been a fixture on the U.S. Dressage Team. Lyle and Salvino won team silver at the 2018 World Equestrian Games, finished 7th at the 2019 World Cup Finals in Gothenburg, and are short listed for the 2021 Tokyo Olympics.

The 24-year old Sara Hassler and Harmony Sport Horses' KWPN gelding Boitano (by Santano x Whinny Jackson) clocked four international victories at small tour level in 2019 and claimed the bronze medal at the 2019 U.S. Small Tour Championships. This year they moved to big tour level and captured the 2020 U.S. Under 25 Champion's title. Jochen sold Boitano to the U.S.A. as an FEI hopeful in 2014

Interested to find out which other international calibre horses Jochen has for sale in his portofolio? Feel free to get in touch with him.