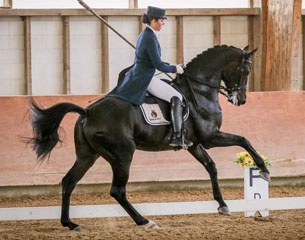 Illuster, Equestricons Haddoway, and Don Antonio are three talented FEI level trained dressage horses which have been sold to the U.S.A. as future Grand Prix prospects by German horse dealer Jochen Arl. This big sale proves the American effort in getting more high quality horses across the Atlantic for their ever growing CDI show circuit and the country's ambition for glory towards the 2020 Tokyo Olympic Games.

The 8-year old Belgian warmblood Illuster (by Spielberg x Contango) has been sold to New York based Sasha Cutter, but the ride has been given to San Diego based Shannon Peters.  Illuster was scouted on the national Belgian show circuit by Jochen Arl who sold it to Portuguese Maria Pais do Amaral. The horse is schooling the Grand Prix movements and has international calibre quality. Shannon Peters, who last competed internationally on Weltino's Magic in 2015, will continue the show career of the dark bay gelding.

"Illuster is just amazing! He is the most supple and elastic horse I have ever sat on," Peters told Eurodressage. "I will do the small tour with him this season, while confirming all of the Grand Prix at home. Endless gratitude to Sasha Cutter for giving me the ride on this fabulous horse!" 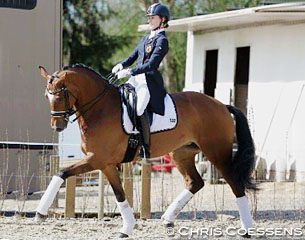 The 9-year old Hanoverian mare Equestricons Haddoway (by Hotline x Acapulco) has been sold to Wellington based FEI rider Chase Hickok. The 26-year old Chase will be making the transition to senior Grand Prix level after having competed former U.S. Pan Am team horse Sagacious HF on the international Under 25 circuit in 2015. Haddoway was initially acquired by Arl as a junior rider's horse, but under the careful training of Swedish Anna Blomgren, the bright bay mare blossomed into a stunning future Grand Prix prospect schooling all the upper level movements. Hickok will make her entry into the senior division aboard this new star.

"I'm so excited about Haddoway. She shows fantastic talent for the Grand Prix and is a really lovely mover," Hickok told Eurodressage. "I'm really looking forward to getting her into the barn and seeing what the future holds for us together. She has a super personality and temperament and is really a phenomenal mare."

The 12-year old Hanoverian gelding Don Antonio (by Don Frederico x A Jungle Prince) has been acquired by the Wellington based trainer and horse dealer Endel Ots. The powerful dark bay competed in the international medium tour this year with Pais do Amaral. Don Antonio spent the summer getting fine-tuned at Grand Prix level by Blomgren and he will now move to Florida as a top potential Grand Prix horse for sale at Ots' yard.