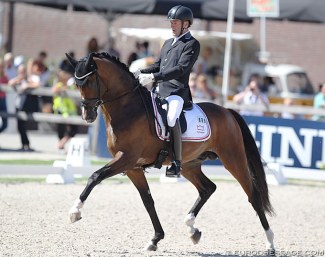 The Danish warmblood society has decided to bestow the 8-year old Hesselhøjs Donkey Boy with Elite Status. He is one of the youngest stallions to ever do so.

Hesselhøjs Donkey Boy is by the late ERA Dancing Hit x Milan and bred by the Sjobeck Hoeck family of Stutteri Hesselhoj. He is owned by Norwegian Kristin Andresen.

The criteria to be named Elite stallion i the Danish warmblood society includes top level performance of the stallion himself as well as his offspring. Donkey Boy meets the criteria at the young age of 8.

No less than 85% of the 33 daughters that have been performance tests passed the testing and received a medal. He sired two licensed sons so far: Hesselhoj Downtown and Ambjergs Delgadino. 11 offspring from his first crop qualified for the Danish Young Horse Championships as 4-year olds.