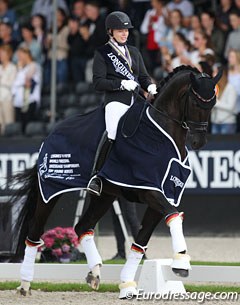 The Hanoverian licensed stallion Don Martillo prevailed in the 5-year old Finals test, keeping hold of the number one spot and raking in the World Champion's title and gold medal at the 2017 World Championships for Young Dressage Horses in Ermelo, The Netherlands, on Sunday morning 6 August 2017. The silver went to Andreas Helgstrand on Ferrari, the bronze was for Jan Christensen on Hesselhoj's Donkey Boy.

The fifteen best scoring horses of the preliminary test (12) and consolation finals (3) were invited to the finals. With the quality of horses never having been as exceptional as this year, the 5-year old finals test was an incredible one to watch, even though there were no major surprises in the final ranking.

Dutch Eddy de Wolff van Westerrode was the head judge and he was joined by Marietta Almasy (FRA), Susie Hoevenaars (AUS) and Christoph Hess (GER). The latter provided the commentary after the class. While Hess is a very appealing speaker, doing his best to attract the audience as well as possible, he sometimes spoke openly about the judges being redundent ("we won't need judges, we have the spectators") and that the audience is equally qualified with their expertise to assess the horses. This was a bit weird, yet funny. 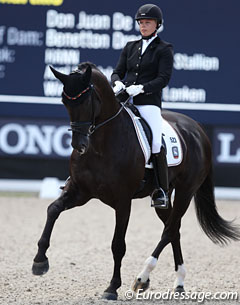 Mario von Depka and Axel Windeler's Hanoverian stallion Don Martillo (by Don Juan de Hus x Benetton Dream) was the convincing winner of the preliminary test and little stood in his way to claim the title with a faultfree ride.

Under German Ann-Christin Wienkamp, the black showed much rhythm, flow and regularity in trot with an active hindleg that could have been a bit more carrying. The extended trot had good lengthening of the frame, but the overstep was not the biggest. While the stallion worked very obediently, he did lack a bit of the sparkle he has shown in the first round. The horse gave a slightly tired impression, but still worked hard for his rider. The walk was active, with good relaxation and ground cover. He was always soft in the bridle. The canter has a regular 3-beat rhythm but in the counter canter the hindlegs went a bit out. The simple changes were lovely though but in the end halt he was wide behind. 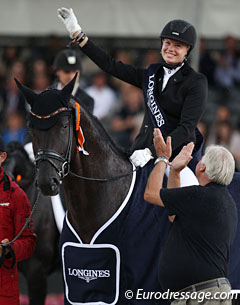 The judges rewarded the black with a 9.7 for trot, 10 for walk, 9.7 for canter, 9.5 for submission and 9.8 for general impression. With a total of 9.74 points, Don Martillo became the new 5-year old World Champion. The judges described the combination as "a dream team". The difference with the second placed horse was that Don Martillo had "more suppleness and was more under control than Ferrari's".

"He was super in form, he listened to my aids and he loved riding in the arena," said Wienkamp at the press conference. Ann-Christin was a bronze medal winner on Sir Olli at the 2016 World Championships, but got gold now. Sir Olli sold after the Championships, and Wienkamp seemed unsure about her future with Don Martillo. "He could be a very good Grand Prix horse. We (Wienkamp and the owners) only spoke about this year. There are no plans for next year." 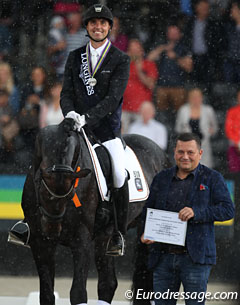 While Don Martillo lost a bit of his shine in the Finals, Andreas Helgstrand's Oldenburg non-licensed stallion Ferrari OLD (by Foundation x Hotline) upped the ante and was even better than in the preliminary test. The horse was more relaxed and swinging through the body, even though he was not always entirely through in the bridle and regularly dropped behind the vertical. Nevertheless, Helgstrand did not pressure the horse and rode him in his natural gaits.

The trot had so much suppleness and spring and the sometimes slow hindleg was quicker off the ground than in the preliminary test. The medium and extended trot were huge, but the medium was hurried. The canter work has much scope and ground cover, but the horse needed much direction of the rider to stay balanced in the counter canter. In one simple change the walk became lateral, but the extensions were really uphill and big.

The judges rewarded the large-framed stallion with 9.7 for trot, 8.5 for walk, 9.5 for canter, 8.8 for submission and 9.5 for general impression. The total of 9.2 points ranked them second for silver. Commentator Hess said that Ferrari is "a powerful horse with unbelievable gaits with a very good prospect for the future." He remarked on the the "small problem in the connection betweeen the hand and mouth," but added that Ferrari is a "very well trained horse." 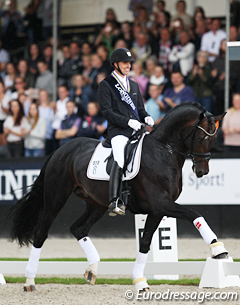 Helgstrand was very pleased with his silver medal but took particular pride in the fact that his stable had 10 (!) horses competing in Ermelo of which 8 (!!) made it into the finals.  "It has been a very busy week and last half year," said Helgstrand. "We try to get as many horses here as possible and produce top athletes that way. Ferrari has a character for a 10. He needs time. I know he needs to come more on the hindleg, but I've only had him since May."  Andreas praised the commentary which the judges provided after the test. "It's good that they give positive commentary. This is what we riders need." When asked whether he'll be back with Ferrari next year, the horse dealer replied, "We'll see tomorrow. He won't be cheap. I like to ride him and keep him, but we'll see. All our horses are for sale." 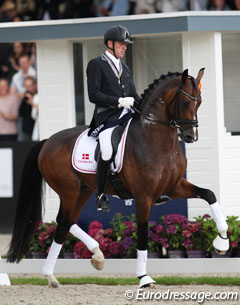 The very leggy and compact bay stallion is a cute and sympathetic horse. He paddles with his right front leg and got a bit hectic and unbalanced in trot today, but he was active, and showed great willingness to work. In the medium trot he was wide behind, in the extended he was better with much ground cover. The side silhouette is lovely with legs flying. In walk Donkey Boy has massive overtrack, which he can achieve easily as he is short-backed. The strike off to canter was an issue as he picked up the wrong lead and then leapt into the right one. This was the moment where the pair lost the silver medal. The stallion paints a lovely picture in canter, but he's still very green and unbalanced in it. Especially in the counter canter he fell apart a bit, but still kept a pure 3-beat rhythm. Donkey Boy is definitely a gifted mover and the tall Jan Christensen is maybe one size too big for the stallion, but the pair brims with talent. The horse just needs time. 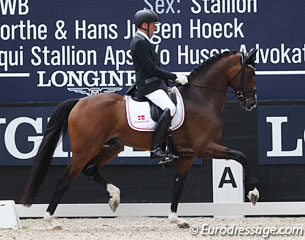 The judges rewarded Donkey Boy with 9.0 for trot, 9.5 for walk, 9.4 for canter, 8.4 for submission and 9.2 for general impression. The judges loved the horse's walk and praised the canter for being "clear, uphill, with possibility to collect and with good jump."

At the press conference Jan Christensen, a professional dressage rider who runs Noagaard dressage stable in Boeslunde, Denmark, was thrilled with his medal. "I'm very happy. The horse was a bit better in the preliminary test but the test today is more difficult. I made a mistake, which I take on my shoulder." Also Christensen was unsure about his future on Donkey Boy. "I hope to keep him and ride him next year. I actually hope to keep him many years."

German Olympian Dorothee Schneider has garnered much fame for being a specialist in expertly training young horses up the levels to Grand Prix. All horses she has ridden in the World Championships have stood out by their exemplary training and lightness in contact no matter what quality they were. With Silke Pelzer's Oldenburg mare Sisters Act OLD von Rosencarre (by Sandro Hit x Royal Diamond) it was no different. The bay mare is not the strongest mover, but the trot was elegant and cadenced, but could have been a bit more up in the poll. The extensions were quiet and relaxed with good overstep. She had two hooves overtrack in the extended walk. The canter was well ridden, even though the mare could move more uphill. In counter canter she got a bit insecure and one simple change was short, but she was dead straight in the body in the extended canter. 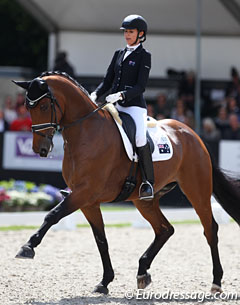 The judges praised Sisters Act for being "very well ridden with good, natural paces." She scored 9 for trot 8.7 for walk and canter, 9.2 for submission and 9.4 for general impression.

The Hanoverian mare Casablanca (by Conen x Fidertanz x Weltmeyer) became the talk of the town after the preliminary test, impressing spectators with her amazing movements potential. In the finals, Australian Simone Pearce looked eager to grab a medal but she was unable to finish the job. The horse overpowered her fine rider a bit with her quality and scope. In trot the mare showed massive scope and airtime, but she often got a bit high in the poll and showed no bending in the corners. The trot became a bit hurried on the voltes. The extended walk was good, but got lateral before the turn on the haunches. In canter, Casablanca has a very active, engaged hindleg that reaches under the body, each stride being uphill. However in the counter canter she lost flexibility. The simple change failed and went via trot. Also the transition down to trot went via walk and the mare did not properly stretch when she was given the rein. Despite these training issues, Casablanca was certainly one of the stars of the Championships.

The judges mentioned that the "tall horse" had "good elasticity and was very powerful in trot, but she did not always have super swing." The canter was "amazing, uphill" but "the submission was weak today." Still she was described as having "top class potential." They awarded her 9.5 for trot, 8.8 for walk, 9.4 for canter, 8.3 for submission and 9 for general impression.

Adelinde Cornelissen and the Guelderlander bred Henkie, owned by Aris van Manen and J. van den Berg, showed much cadence in trot with a good rhythm on the curved lines. The hindleg was a pushing one, instead of a carrying one. The extended walk was top class but the quality of the walk decreased and got lateral with the turn on the haunches. The canter is large and powerful, but still quite unbalanced and the croup often was high, especially in the left counter canter. Also the transition down from canter to trot was abrupt and almost went via walk. Henkie impressed with his forward going mentality and powerful push from behind. 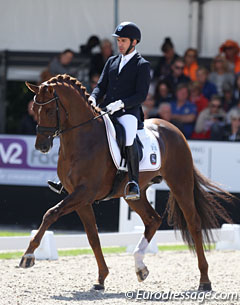 The judges liked Henkie's walk which they considered a highlight. They mention his "time in the air, but he sometimes get strong in her hands." They rewarded the interestingly bred bay stallion with 8.5 for trot, 9.2 for walk, 9 for canter, 8.4 for submission and 8.9 for general impression.

Another one of the most interesting horses in the field this year was the Hanoverian licensed stallion D'Avie. Under Spanish Severo Jurado Lopez the gorgeous chestnut stallion showed unbelievable talent but there were still a few issues. In trot the side silhouette is beautiful: active and uphill. In the extensions he got a bit tight in the back and sometimes there were a few passagey steps. In the voltes he dropped in the poll. The extended walk was clear in rhythm. The quality of the canter was better today than in the preliminary test, with the stallion being  nicely uphill but in the counter canter he got tense and insecure and changed lead. Also the downward transition was abrupt. With more time, D'Avie can certainly develop into a top star.

The judges acknowledged that it was a pity for the big mistakes and praised the rider for "bringing the horse back in a fairly good suppleness after the mistake." They scored D'Avie 9.6 for trot, 8.8 for walk, 8.7 for canter, 7.9 for submission an 9 for general impression.