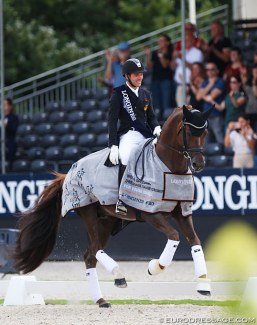 Severo Jurado Lopez and D'Avie renewed their world champion's title by winning the 7-year old Finals at the 2019 World Championships for Young Dressage Horses in Ermelo, The Netherlands, on Sunday 4 August 2019.

The 2019 World Championships came to a conclusion on Sunday afternoon at the KNHS and KWPN headquarters in Ermelo with sunny but mild summer weather enabling the horses to compete in optimal conditions. D'Avie was the favourite for the title and there were little surprises in the Finals as the top three of the preliminary round recaptured their places in the Finals.

The judging of the 7-year olds is carried out a bit differently from the 5 and 6-year old divisions. There are two panels of judges, one similar to the 5/6 year old classes assessing the basic gaits, submission and perspective of the horse, and two judges assess the technical quality of the test riding. For this year's Finals, Nivelle (GER), Gardner (GBR), Andersson (SWE), Baarup (DEN) and Campos (ESP) officiated.

Severo Jurado decided to ride Andreas Helgstrand's Hanoverian stallion D'Avie (by Don Juan de Hus x Londonderry) in a more friendly looking snaffle instead of the double bridle which helped the overall soft image of the ride. The stallion is bred by Dorothee Heitmuller.

They entered and finished their ride with two squares but stretched halts. The trot work was very fluent with good ground cover in the shoulder-ins and half passes, but the horse was pushed to be more expressive on the short sides and lost a bit of the balance on the voltes. The trot work with the given rein was wonderful as the horse beautifully stretched the neck forward with the nose out. D'Avie could work a bit more with his back as he has the tendency to hollow it and push the poll high. The extended walk had two hooves overtrack and the collected walk stayed clear in the rhythm and the turns on the haunches were well executed. The canter half passes were beautiful but overall Jurado over-collected the horse in the canter work. This was of course beneficial for the half pirouettes, but there could have been more forward flow so the horse swung more over the back. The tempi changes were all correct but the rider made big effort in the saddle to get them done and they were often crooked.

Judge Andrew Gardner provided the public commentary and praised the trot for being "rhythmical", "with expression and the ability to collect." The walk "improved in the collected walk but in the extended walk we were looking for more ground cover." The canter has "tremendous scope, so off the ground, expressive and in the air." There were a few small blips: "not always through the poll" but "the talent is so clear with the scope it has."

Jurado Lopez was overjoyed with his second gold medal on D'Avie. It is already his fifth gold in his career as he also won triple gold on Fiontini. The mare has now made her Grand Prix debut and was in the running for a Spanish team spot for the 2019 European Championships, but is now off with an injury. When asked if he feels pressure to live up to the expectations as the title favourite, Jurado replied, "of course I feel pressure, especially when they (the rivals) come so close behind me, but I try not to destroy the beautiful competition because of (my) nerves."

D'Avie is a popular breeding stallion in Helgstrand's sales barn and like every horse there is for sale. Naturally Jurado hopes to keep the ride on the chestnut stallion: "I would like to continue his education just like with Fiontini. I would like to end his education (at Grand Prix)." That D'Avie is already on his way to Grand Prix was obvious in the prize giving ceremony where he showed passage and piaffe, although the horse was skipping behind with the hindlegs swinging out from under the body due to his young age.

Danish Jan Moller Christesen steered the Danish warmblood stallion Hesselhoj Donkey Boy (by ERA Dancing Hit x Milan) to a silver medal in the 7-year old Finals. The pair were the bronze medalists in 2017 when the horse was five, but missed out on a podium place last year when the long legged bay was not as ready for the 6-year old task. This year Donkey Boy, who is bred by Dorthe and Hans Sjobeck Hoeck, showed good development and maturity.

Owned by Norwegian Kristin Andresen (though listed as owned by company Equi Stallion & Husen Advokat), Donkey Boy has a very expressive and engaged trot, but he pulls the hocks high and got a bit wide in the lengthenings although he is very engaged. The stallion was ridden in a double bridle and though the contact was steady, he tilted the head in some of the trot work, or was often bent more to the left. He was ground covering in the extended walk and the collected walk was very well regulated. Throughout the test the horse was very willing to work with the rider. The changes went well  all but one, but the ones to the left were crooked as the rider swings much with his body in the saddle.

The judges described Donkey Boy as a "horse with exceptional talent. He is active, big and generous. Always uphill with freedom of the shoulder." For the walk "we were only able to find a 10 because that's the only thing we have available." They remarked that for the submission "ocassionally he was high in the poll with the risk to push the back away," but Gardner added that "the talent is so clear and the scope it has."

The bronze medal went to the Oldenburg stallion Total Hope (by Totilas x Don Schufro). Bred by Christine Arns-Krogman out of the Weihegold dam line and owned by Danish Lone Boegh Henriksen in partnership with Paul Schockemohle, the ponyesque Total Hope is a small pocket rocket.

Under Norwegian Isabel Bache-Freese, Total Hope showed improved form in the Finals test compared to the preliminary. Where the walk was still shaky and unclear in the first round, Freese had the horse together and on form for the Finals which counted for the medals.

Total Hope had a difficult entry on the center line, twice stalling in the tempo as he anticipated the halt at X. The trot was very springy  and active, but he dropped a bit in the poll in the shoulder in right or bopped his head a bit, and when he was given the rein he did not stretch the neck enough. The extended trots were big in ground cover, but again there was little stretch forward in the frame and the nose stays tucked at the vertical. Still the trot was very nice in tempo, fluent in the traversal movements. The extended walk had good overstep and the collected was cleverly ridden: quite short in steps but clear in the rhythm. The canter work was very forward and nice in tempo with big scopey flying changes and good ability to sit in the pirouettes. The canter half passes were a bit unbalanced but the extended canter was very uphill. Freese rode a very appealing, strong test.

The judges praised the stallion for his "very high quality trot. We very much liked the cadence and how supple and elastic it looked." In the collected walk he was "a little bit hesitant, but it remained four beat." The canter was described as "exceptional: uphill, balanced, off the ground. On occasions it takes our breath away." They believed Total Hope has "massive scope and enormous talent."

Fourth Ermelo, Back to Verden for 2020

The prize giving ceremony for D'Avie marked the end of the fourth edition of the World Championships in Ermelo.

Aat Both, chairman of the organization committee, stated, “Next year, the World Breeding Dressage Championships are organized in Verden, Germany. It will return to the grounds it called home for many years, before it came to ‘our’ Ermelo. However, we look to the future. In 2021, we hope to pick up where we left off and strive to welcome world’s best young horses in the Netherlands again.”

Organiser Joris Kemperman presented some statistics at the press conference “This year we had over 170 competing horses, representing 22 countries and 21 studbooks. In these four days, we could welcome approximately 21.000 visitors."

Kemperman cited that Wandres winning gold in the 6-year old division was one of the highlights of the event for him. "Two years ago, he was awarded bronze in the prize giving ceremony, only to lose that medal when a mistake was discovered in the scores. It was great to see him so happy with his victory today.”

Joris added that Ermelo has put itself forward as candidate to host the WCYH for another three year period: "Both Verden and Ermelo have handed in their bid with the FEI for the 2021, 2022, 2023 world championships. We expect the decision of the FEI to follow in November and of course we hope we may host these phenomenal championships again. Hopefully, we may again welcome all the competitors and the dressage enthusiasts in Ermelo in 2021 and the years after.”