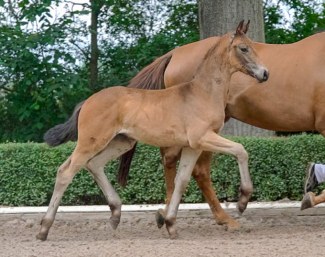 This is the first day of only two to bid and secure the foal of your dreams! Today, you have the unique opportunity to acquire your foal from the Rhenania Horses breeding farm in the 100% online Ekestrian auction, for whom “The dam makes the difference!” The auction concludes on 29 July 2020.

This is the FIRST time that Rhenania will offer you all their foals of the year for sale.

Find in this incredible catalog, no than less three fillies from Foundation and Glock’s Flavio’s full sister, a Vanity Fair half sister filly and her two colts, a half sister of the stallion Finnigan filly and colts who are stallion prospects!

The complete catalog can be seen here.

Ekestrian is proud to present this catalogue of 12 foals with modern origins and high-performance damlines. Also selected by our expert, Jessica Michel-Botton, each foal correspond to the best criterias of conformation, paces and rare origins for breeding.

“The dam makes the difference”: Scally

Scally is the sister of Freya who already competed in Prix St Georg.

Dam II, Soho, is the sister of Samantha who produced Dante’s Hit OLD finalist of the world championships for 5-year-olds in 2019 in Ermelo under the saddle of Dorothée Schneider with over 88%. He qualified for the Bundeschampionat in Kronberg with a score of 8.8. On the damline, you will also find Oldi 67, who won under Thamar Zweistra’s saddle, the CDI of Biarritz for the 6 year old with over 80%, 2nd for the 7 year old at the CDI of Roosendaal, classed 7th with over 67% at the CDI*** of Mariakalnok in the Grand Prix spécial. Under Jazmin Yom Tov’s saddle, he participated at the European Championship for Young Rider in 2017 at Rosendaal. Sundance, the approved stallion is also part of this damline.

Lot 3 - Stallion prospect! Feinrich out of a dam by Stoiber SN x Levantos I

Frohsinn (Johnny), clarified and confident he seems to be above things " - Matthias Fieseler - Rhenania Horses

“The dam makes the difference”: Lilofee

Lilofee is also the sister of Sansiera, dam of the approved stallion Quanticus. Ridden by Beatrice Buchwald, he was second with over 78% at the Bundeschampionat qualification.

We also find in this famous damline, Corlander II who competed in Grand Prix U25 under Ari Lopez’s saddle.

Lilofee is presenting in the catalogue:

Erlkönig (Early), only a few days old, he already left no doubt about his exceptional sportiness " - Matthias Fieseler - Rhenania Horses

Lot 8 - Filly by Valdiviani, out of a sister to Fidertanz’ dam!

Duneside, together with Erlkönig he takes care of the maintenance of the entire herd of mares. A real entertainer! " - Matthias Fieseler - Rhenania Horses

Find also in this incredible catalog, nothing less than the half sister of Vanity Fair, Champion of the 2018 Hanoverian Elite Mare Show in Verden, a half sister of the stallion Finnigan and colts who are stallion prospects

To be able to bid the day of the auction, don’t forget to create your profile on Ekestrian’s website:https://www.ekestrian.com/en/register

For any question about the lots or the auction, contact the Ekestrian team:

Breeders: online auctions can be for you!

The selections for 2020 auctions are always in progress! Send your complete applications for your foals, embryos, broodmares and 2 years to carodufil.ek@gmail.com (name of horse, father, mother, father of mother, age, location, reserve price, photos and videos).

Talk to you soon!