The Wait is Over: Videos of Private Rhenania x Ekestrian Online Auction are Online 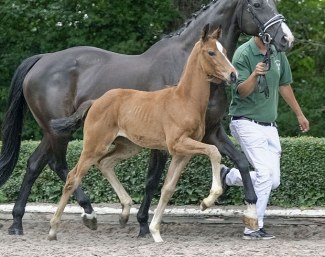 On 28 and 29 July 2020 you will have the unique opportunity to acquire your foal from the Rhenania Horses breeding farm at the 100% online auction on Ekestrian, where “The dam makes the difference!”. This is the FIRST time that Rhenania will offer to you all their foals of the year.

Find in this incredible collection, no than less three fillies from Foundation and Glock’s Flavio’s full sister, a Vanity Fair half sister filly and her two colts, a half sister of the stallion Finnigan filly and colts who are stallion prospects!

The complete collection can be viewed here.

Ekestrian is proud to present this catalogue of 12 foals with modern origins and high-performance damlines. Also selected by our expert, Jessica Michel-Botton, each foal corresponds to the best criterias of conformation, paces and rare origins for breeding.

Today, Ekestrian introduces you to Vanity Fair. On the catalogue, you will find her half sister by Valdiviani and her two colts by For Gold and Escamillo.

Vanity Fair is a Hanoverian premium mare who finished 4th at the Bundeschampionat 2019 for mares and geldings with 8.4 (8.5 for trot, 8.5 for canter, 8 for walk, 9 for rideability and 8 for general impression) under Carlos Caetano’s saddle. Vanity Fair was named champion of the 2018 Hanoverian Elite Mare Show in Verden, Germany.

Vanity Fair is the half sister of Der Zauberer who was sold for 400.000 euros at the PSI auction in 2014, and of Dahlia who is competing Prix St Georg under Allison Gerlt’s saddle with over 65%.

Dam II, Weineperl is the half sister of the approved stallions Flammengold and Freestyle who is also competing in Prix St Georg. In its 100-day test in Prussendorf, Freestyle scored a perfect 10 for character and 9 for temperament, 9.3 for rideability and has won the test.

We also find Rubin Paloma SN who is the dam of Smaragd 73, competing in Prix St Georg under Fabia Stonjek’s saddle. Dam III, Paloma is the full sister of Patrizia who was the best mare in Hessen in 1997 and dam of Don Patrizier Z2-drs and Sinizia B-drs. Patrizia is also the dam of Sallyzia II who produced Dragon Hill, the approved stallion Premium HANN, OLDBG, RHEIN, … Dragon Hill finished his 70-days test in Schlieckau with a final score of 8.48 for the dressage part as the best candidate in the group. He received the maximum score of 10.0 for his ease under saddle and his morphology. Dragon Hill took part in four dressage events and won all of them!! ! In 2015, Dragon Hill has produced a remarkable first generation of foals in Germany and Denmark with numerous award-winning foals.

Primavera (1997, Parademarsch) Verbandsprämie,reached the second place of the 2 year old mares at Asfeld. We also find in the performing damline, Languedoc, winner in CDI3* Grand Prix under Kristian Von Krusentierna’s saddle with over 72% and CDI-W with over 72%. Under Lina Dolk’s saddle, he won CDI YR with over 73%. Languedoc participated at the 2018 European Championship at Fontainebleau and finished 6th of the team test with over 72,5%.

Lot 2 - Vogue: Your next Vanity Fair?

Champion of the 2018 Hanoverian Elite Mare Show in Verden! " Vogue, noble and maybe a little shy, she cleverly pulls everyone under her spell " - Matthias Fieseler - Rhenania Horses

Colt out of the champion of the 2018 Hanoverian Elite Mare Show in Verden and 4th at the Bundeschampionat 2019 " Foreign Affairs (Koksi), the youngest, but cheeky enough not to let the older ones fool you. The hallmark is the white line in his right nostril. " - Matthias Fieseler - Rhenania Horses

Lot 9 - Ezra (by Escamillo out of Vanita Fair)

Colt by Escamillo out of Vanity Fair, champion of the 2018 Hanoverian Elite Mare Show in Verden and 4th at the Bundeschampionat 2019 " Ezra (Eddy), reserved, but self-confident, he appears to be increasingly similar in appearance and character to his mother. " - Matthias Fieseler - Rhenania Horses

Find also in this incredible catalog, no than less three fillies from Foundation and Glock’s Flavio’s full sister, a half sister of the stallion Finnigan filly and colts who are stallion prospects!

To be able to bid the day of the auction, don’t forget to create your profile on Ekestrian’s website: https://www.ekestrian.com/en/register

For any question about the lots or the auction, contact the Ekestrian team:

Breeders: online auctions can be for you!

The selections for 2020 auctions are always in progress! Send your complete applications for your foals, embryos, broodmares and 2 years to carodufil.ek@gmail.com (name of horse, father, mother, father of mother, age, location, reserve price, photos and videos).

Talk to you soon!