Pony Legend Dornik B Passed Away 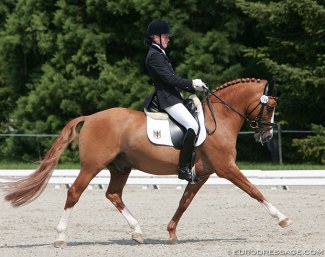 The legendary dressage pony and breeding stallion Dornik B has passed away on 17 July 2020 at his home, Gestut Bönninger in Tönisvorst, Germany. He was 29 years old.

Dornik B is the most successful ponies in the world, in dressage sport and breeding.

Dornik B was born in 1991 and was by Derano Gold out of  Dubary (by Derbino x Valentino).

He was bred by Hans-Georg Stassen at Gestut Bönninger and has always been owned by them, although the sport rights to the pony were leased to a plethora of riders for ten thousands of euros.

Dornik B became the first pony to win the Bundeschampionate four years in a row from 1994 till 1997.

He made his show debut as a 3-year old 1994 and was first competed by Inga Groll, followed by Sabine Schut-Kery and Gertrut Björling. The latter rider took Dornik B to his first Bundeschampion's title.

As of 1996 Jana Kun rode Dornik B more regularly and she won the Bundeschampionate. In 1997 Meyer-Biss and Kun continued to swap rides but Kun won in Warendorf that year in the 6-year old pony class.

As of 1997 Meyer-Biss and Alice Fengels began exchanging rides on the stallion, although in 1999 it was Meyer-Biss who trained him to Prix St Georges level and competed him at local shows in the area.

In the autumn of 1999 Marion Engelen (now Marion Op 't Hipt) took over the ride and this partnership was another major success story. The pair won individual gold at the 2000 and 2001 European Pony Championships.

"Dornik was not only special because of his success, his movements or his inheritance qualities, for me he had a perfect character," Marion told Eurodressage. "Dornik was a popular stallion but when I spend time with him he was such a lovely children's pony. We only had two year together but until today I have the best memory of this time. For me an unforgettable moment was the first training day on our first European Championships in Hagen. He was really fascinated by the British mares and ran the whole training time more or less uncontrollably in the main arena. Everyone probably were wondering what we were doing there. It was really embarrassing, but on the next day he was his 'old' self again and we were able to show a really great test."

In 2002 there was team gold and individual bronze for Stephanie Jansen. In 2003 Dornik was not selected for the Europeans, but Jansen ended up riding his son Dornik Double.

“Dornik had such a special character, as a friend and as a sports partner,” Lüttgen told Eurodressage. “He was super cool and well behaved, even if he was a breeding stallion.
In the arena he gave you a super good feeling but you had to have him on your side, otherwise he could be very, very lazy. In our last season together, I had the luck to bring him to my own stable. I could do everything exactly as I thought it was the best for him and then he gave everything for me. He always will be a very very special horse for me and I’m so thankful to had the opportunity to learn so much from him together with his all-time trainer Stefanie Meyer-Biss.“

In the autumn of 2007 he was leased to Katharina Weychert who won team gold and individual silver at the 2008 European Pony Championships in Avenches, Switzerland.

"He was a very special pony that taught me so much about dressage riding," Weychert told Eurodressage. "Even more so he was a friend and family member to me. In the stable he was very friendly, a real children's pony, always calm and cuddly. He really really loved snacks, carrots or apples and would have followed me around all day at the stable to get a snack, like a little dog. In the ring he was a very good teacher. I’ve learned so much from him! That made him so special, this mix of being a teacher in the arena and a cute, cuddly pony in the stable. I am so happy, that I’ve met him and that I had the opportunity to ride him."

After his retirement from international sport, Dornik B returned to Gestut Bönninger where he continued to stand at stud. He was licensed at the 1993 Rhinelander pony stallion licensing and achieved his HLP scores through sport.

In 2011, Dornik made a come back to the arena at age 20 (!) as a professor for the breeder's granddaughter Esther Stassen. The pair competed at some local shows until August 2013. The German equestrian federation has recorded no less than 255 competition starts for this pony, not including all international rides!

"We gratitude the team said goodbye to our extraordinary producer, beloved and most successful dressage pony of all times, which opened doors to so many sport careers," said Stassen upon the passing on the stallion.