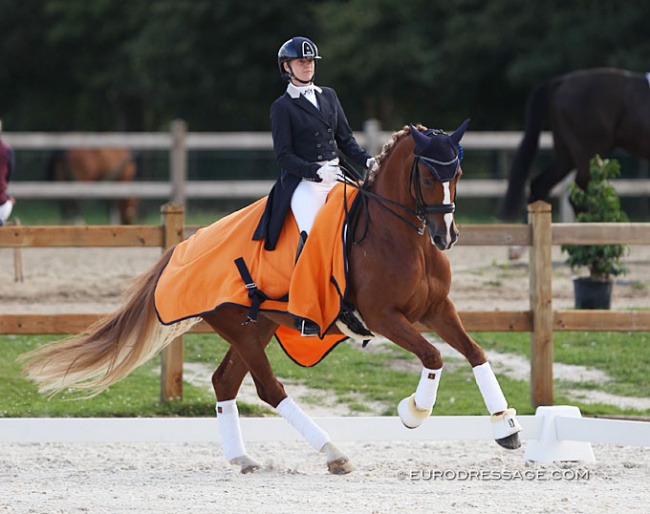 Belgian duo Inge Heylen and her home bred Kalagan H have been moving up on the board since September 2020 and booked their first international victory in the Prix St Georges at the post-corona 2020 CDI Grote Brogel on Friday 10 July 2020.

Heylen and her 10-year old Belgian warmblood mare Kalagan H (by Universal x Wundermeyer) made an impression at the 2019 CDI Waregem in September and continued with ever improvising scores at the CDI Le Mans (October 2019) and CDI-W Mechelen (December 2019).

The duo was not yet topping the board but the potential was brimming and at the last show before the corona pandemic - the CDI Lier in February 2020 - they were consistently scoring over 70%.

At the CDN Grote Brogel today the duo showed their talent in the last class of the day, the 2* Prix St Georges. The chestnut mare is a very strong mover with especially her uphill canter as highlight gait. The two are very much in sync' with each other and posted a winning score of 71.373%, although the three judges had her between 69.412% and 73.088%.

Kalagan H is home bred by Inge's brother Tom and father Ludo Heylen. The 19-year old dam Butterfly (by Wundermeyer x Wendekreis x Mellinor) is the pride of the Heylen family as a super producer of dressage horses. She also produced Gucci H (by Gribaldi) who is competing at international Grand Prix level with Tom and has been the dam to all talent in the Heylen stable, with a 7-year old Don Frederico, two Furstenballs, two Revolutions and a Vivaldi in the pipeline.

Kalagan H is sired by Universal (by Flemmingh x Goodtimes), which Tom competed at the 2006 World Young Horse Championships in Verden and competed up to Grand Prix level until an injury ended the stallion's sport career.

Jorinde Verwimp and the Belgian warmblood bred Just a Little Bit Krack van het Klaverhof (by Tango x Krack C) were third 71.177%. The 11-year old bay mare is not the most spectacular mover but produced a very correct test under Belgian Olympian Verwimp and was consistent in the contact.

Interested in photos for your social media or prints, send us an email FIRST with your name and we'll get in touch about reproduction possibilities.
We sell our photos to keep Eurodressage up and running. Please respect our copyright.