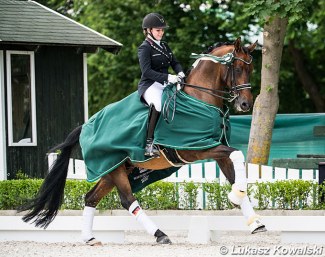 The German equestrian federation has published the names of the children, juniors and young riders who are invited to participate in the German team selection weekend for the 2020 European Youth Championships.

Due to the corona crisis, the normal team selection process can not be followed. The German NF decided to host one 2-day selection event at the DOKR centre in Warendorf on 17 - 19 July 2020.

Team trainer Hans-Heinrich Meyer zu Strohen and the Youth Dressage selection committee of the German Equestrian Federation selected the group based on training seminars, which were already held in Warendorf the past few months, as well as results achieved at the CDI-W Mariakalnok (25 - 28 June 2020).

Earlier, the invited pony combinations were named. Now the names of the Children, juniors and young riders are disclosed.

The German Under 25 team will be decided after the CDI Hagen at which the long-listed U25 riders are asked to compete.