What is happening
Sweden 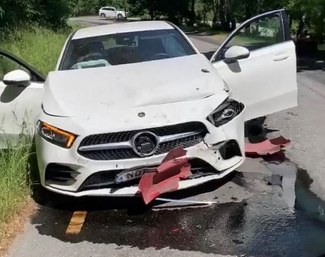 Swedish Grand Prix rider Natalie Oldfors was in a car collision on Monday 15 June 2020 which left her shook up. Fortunately she walked away uninjured from the accident, but her car was totaled.

On Monday noon Oldfors and her groom Sara Ahult with four dogs drove from one stable to the other during lunch time, when they were in a head-on collision with another car.

"Your life can pass away so quickly," Oldfors stated. "We met another car on the wrong side of the road, directly after a curve and we had no chance to get away. Everything went so quickly. I just get the eye contact with the other driver quick before the collision and I see the panic in her face. It became a big-head collision. After a few seconds everything just went soooo quiet. Terrible quiet. You are sitting in a car full of smoke and just look down on your legs and see if they still there. With all that adrenaline you didn’t feel anything. I look to the right and I see Sara and she was alive. Then I just screamed at Sara quick, quick out of the car. I thought the car was burning because of all smoke. Sara was so fast picking out the transport bag with the dogs. My door was a bit hard to get out of and you feel the panic inside. Quick out and then the next is waiting for you."

The accident had adrenaline rushing through Oldfors' veins and she feared the condition of the other driver.

"You didn’t expect at all what you will see in the next car. I get the eye contact again. She was alive. It was blood in her face. But, I could talk with her. I made a fast check from her window on her and then I just tell her to stay in the car until the ambulance comes. Then suddenly there were so much people helping us and the girl. People who lived in the area and had heard the collision. They bring water to the dogs and they really helped us with everything. The ambulance was so fast. All people in the accident are alive and didn’t get too much hurt. The driver from the other car, she must have had a angel on her shoulder because her car was so destroyed and not at all that safe as our car. Not even one airbag."

Natalie's dogs - two Pomeranians and two chihuahua's - were all fine because they were protected in the cushioned transport bag.

"I'm so glad I had a new safe car that also called SOS by itself for us and saved us with all that airbags everywhere in the car," Natalie explained. "The car is totally destroyed and couldn’t be repaired but we are safe and sound and happy to be alive. Life can change so fast."

The 34-year old Natalie Oldfors began her international Grand Prix career on Winnie B in 2013. Her current Grand Prix horse is the 14-year old Swedish warmblood Mickey M (by Metall x Bonaparte) which she has been competing at CDI big tour level since 2018.