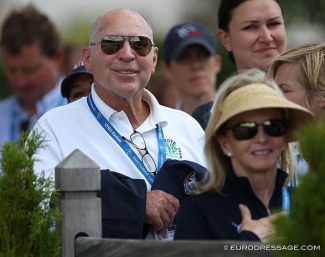 The U.S. Center for SafeSport has issued a lifetime ban of Robert McDonald, an American hunter/jumper trainer and husband of U.S. Dressage Olympian and USEF Technical Advisor Debbie McDonald.

On 10 June 2020, McDonald (73) became listed as “permanently ineligible” to participate in United States Equestrian Federation rated competition and sanctioned activities based on the U.S. Center for SafeSport ruling of sexual misconduct involving a minor.

McDonald has ten days to appeal the decision and request a hearing before an arbitrator.

Eurodressage contacted the United State Equestrian Federation for a statement on the news, which caused a shockwave in the American dressage world.

"The U.S. Center for SafeSport has issued a lifetime ban of hunter/jumper equestrian trainer Robert "Bob" McDonald for violating the SafeSport Code. With this decision, Mr. McDonald is permanently prohibited from participating, in any capacity, in any event, program, activity, or competition authorized by the U.S. Olympic and Paralympic Committee, USEF, or any affiliates of USEF."

USEF press officer Carly Weilminster further told Eurodressage that, "we do not have any other information on the investigation or appeals process at this time."

On 12 June 2020, Robert McDonald issued a statement through PS Dressage concerning the ban.

"I want to begin by stating that I am humbled by the outpouring of support that Debbie and I have received during these past few days. It would be impossible to deal with this matter without your warm kindness and I wanted to thank you all for it."

"With that said, it is with great sadness that I have to release a statement such as this one, but as many of you already know, on June 10, the U.S. Center for SafeSport banned me from participating in the sport that has been my entire life over the last 50 years. It is beyond heartbreaking to see the reputation that I have painstakingly built throughout my career be tarnished by an allegation of misconduct from 47 years ago. Even more gut-wrenching is watching my loved ones being dragged through this as well. It is a terrible reality that we are living in a time when allegations alone would lead to the imposition of such a harsh public sanction. Unfortunately, the system in place does not allow for individuals to be given the opportunity to effectively defend any of the allegations prior to a ban, which is why I have requested for an independent arbitration on the matter."

"It would be inappropriate of me to comment more other than to simply say that I categorically deny the allegations that have been made against me. Throughout my 50-plus year career in the sport, I have always acted in a professional and respectful manner towards all individuals that I have come in contact with, which is why I am shocked at the allegations that were made. While it is paramount for the sport to have a thoughtful and thorough avenue for our riders and trainers to address complaints and areas of concern, it is of equal importance that the process be fair and balanced. That certainly has not been the case here. I am looking forward to the opportunity to present the facts and a fair defense at an independent arbitration. I stand firm on the reputation I have built over half a century and am confident that I will be fully exonerated when the arbitration is complete."

"Finally, I want to add that these are difficult and trying times for myself, Debbie, and our families. We again would like to thank everyone who has reached out with kindness, generosity, compassion, and grace. Your support has carried us the last couple of days and will continue to do so."

McDonald is the 23rd equestrian personality to be banned for life by the U.S. Center for SafeSport, an independent nonprofit organization set up in 2017.

The Center works with National Governing Bodies, including US Equestrian, to enforce the SafeSport Code and the Federal Safe Sport Act. The policies in both the Code and Federal Law are aimed at protecting athletes from harm and abuse and apply to all Olympic and amateur sporting disciplines. It aims to address the problem of child abuse in sport.

So far 23 equestrian trainers have received the "permanent Ineligibility" sanction. In 2019 jumping legend George Morris was banned for life. Only one dressage rider has been permanently banned, Kenneth Acebal. Grand Prix rider Michael Barisone is currently "suspended" as he is still awaiting trial for attempted murder.  The majority of banned trainers/riders comes from the hunter/jumper world, including Robert Gage who committed suicide days before his scheduled appeal hearing.

Three years after it formed with the promise of protecting young athletes from sexual abuse, the U.S. Center for SafeSport is facing increased criticism from individuals in sports due to its process of investigating and banning athletes from Olympic sports.

The nonprofit, which was established in the midst of the Larry Nasser trial for sexual abuse of no less than 150 minors in the U.S. Gymnastics world, initially was touted as a positive way to improve safety and address the significant problems facing many U.S. Olympic sports.

According to the Pulitzer Center,  SafeSport "has faced a backlash from the supporters of banned athletes, coaches, and attorneys who believe that the organization operates outside of the justice system and does not provide adequate due process to the accused. This pushback has clouded the organization as it works to effectively carry out its mission of protecting athletes from abuse."