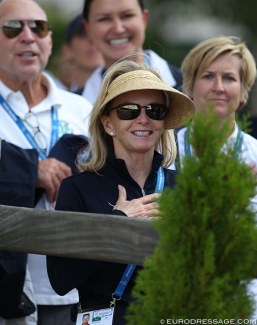 Dover has served in the position since 2013 and will retire following the WEG as planned when he renewed his agreement with US Equestrian in 2016.

US Equestrian conducted a comprehensive search process aimed at identifying the best individual to succeed Dover and ensure a smooth transition. McDonald currently serves as US Equestrian’s Dressage Development Coach and will transition to her role as the U.S. Dressage Technical Advisor on December 1, 2018 pending final contract negotiations. She will continue to serve as a personal coach to her athletes through the WEG and will not have a role in the WEG team selection or any selection to the Elite Program or WEG Short List.

“Thank you to US Equestrian for entrusting me with this opportunity. I am extremely honored and excited to be taking on the position of Technical Advisor,” said McDonald. “I know Robert’s shoes will be hard to fill. His passion simply inspires me, and I will carry that same level of energy and enthusiasm as I strive to continue his success. I look forward to working with our talented athletes, their horses, and personal coaches to help achieve this goal.”

As an athlete, McDonald heavily contributed to U.S. Dressage’s early accomplishments due to her impressive achievements with the chestnut Hanoverian mare Brentina. Their string of accolades included a 1999 Pan American Games team and individual gold medal, an Athens 2004 Olympic team bronze medal, a WEG 2002 team silver and 2006 team bronze medal, and was the first American to win a FEI World Cup Dressage Final in 2003. She has spent the past 11 years advancing athlete-and-horse combinations through the U.S. dressage pipeline. Her success has proved contagious as a personal coach having guided three of her athletes and their horses to the Olympics, including 2012 London participants Adrienne Lyle and Wizard and Rio 2016 team bronze medalists Laura Graves and Verdades and Kasey Perry-Glass and Gorklintgaards Dublet.

“I could not be happier with the naming of Debbie McDonald to take my place as Technical Advisor/Chef d’Equipe,” said Dover. “Debbie has literally been my right arm for the past six years. Our training and coaching philosophies are identical, and this creates a seamless transition for our U.S. athletes. I know America is in the very best hands and our future remains strong.”

The search process for the Development Coach position will be forthcoming.