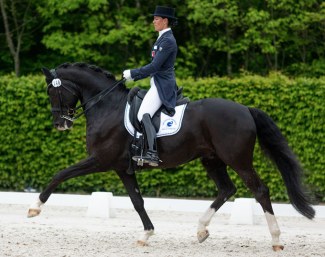 The Swiss bred and internationally competed Grand Prix horse, Londero von Worrenburg, has been sold to Great Britain. The 11-year old will continue his sport career with British Under 25 rider Ellen McCarthy.

Londero von Worrenberg is a Swiss warmblood gelding by Londontiome out of Cali Mera (by Calypso II x Akzent II).

He was bred by Ferdi Hodel and owned by Hans Grunder.

As a 3-year old Londero von Worrenberg was approved for breeding at the 2012 Swiss Warmblood Stallion Licensing in Avenches.

Under Melanie Hofmann the black stallion was trained from young horse level to Prix St Georges level. The pair became reserve champion in the 6-year old division at the 2015 Swiss Warmblood Young Horse Championships in Avenches. In that period the horse got gelded to be focused on sport.

Hofmann competed him through 2017 until she left Grunder Stables. Grunder's new rider Elena Fernandez took over in 2018.

The new pair made its international show debut at the 2018 CDI Nice in the small tour, winning the Intermediaire I test. A week later they also competed at the CDI Crozet.  In 2019 the duo showed at just two internationals, both in May and in France: Saumur and Compiegne.

Fernandez competed Londero at national level in Switzerland until August 2019. They did their first Intermediaire II test together.

In December 2019 Londero von Worrenberg sold to Canadian WEG team rider Jill Irving through Daniel Ramseier, but she ended up not competing him as her Tokyo hopeful.

"Londero is a lovely horse but it was not possible for me to show more than two Grand Prix horses this season," Irving told Eurodressage.

The horse was sent back to Europe and moved to Helen Langehanenberg's yard for further training and to be sold. Ramseier's partner Silve Dietrich-Osten brokered the sale to Great Britain.

"Helen was supposed to compete him in Grand Prix shows but because of Corona this was not possible," Ramseier told Eurodressage. "We show Elli’s trainer, Charlotte Dujardin a clip from Londero and both, Ellie and Charlotte fell in love with the horse. Because of the lockdown in UK travel was not possible, the horse was shipped to UK where Ellie was able to trial ride him for two days."

After the sale of her Under 25 horse Belafonte to British junior Annabella Pidgley, Mccarthy was on the lookout for a second Grand Prix horse alongside her Oldenburg stallion Sir Lancelet M.

Mccarthy test rode Londero at a livery yard in Gloucester with coach Charlotte Dujardin present. The deal was sealed within one week time.

"I tried him. Obviously he came from Germany but we obviously can't fly over there to try out horses there with lockdown, so the owner very kindly sent him to the UK for me to try him. She sent him to my trainer Charlotte. We both fell in love with him, his personality. He's so willing to work and so easy in every way.

"We're still quite new to each other and I only really met him this week," said McCarthy. "He is the most lovely, sweet boy. He's exactly what a Grand Prix horse should be. He's very hot but very sensible. I'm excited to get to know him and start competing."

McCarthy is not sure about her plans yet, whether to do Under 25 or senior Grand Prix.