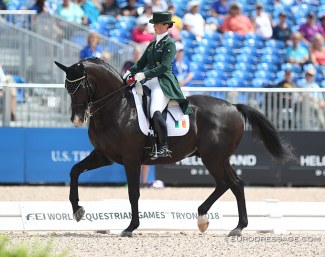 My first day in Montessori school, I was 3 years old.

Isabell Werth. To keep producing top horse after top horse like she does and to still have the drive to compete after winning absolutely everything multiple times is incredible.

I’m pretty happy right now. Although growing up, riding in the fields with my brother and sister on our ponies are some of my best memories

Rodents! I hate mice and rats.

I hate that alarm.

I love all my animals but they are not my possessions, I am theirs. So, my Dior engagement ring

Horses! And I’d love to have my own stables.

When there’s something wrong with one of my horses.

My husband Patrick; and my dogs and horses of course..

To move to Germany to train full time.

So much! I am who I am thanks to their love and they’ve supported me all the way to where I am now..

My best friends, Lisa Buchanan and Naomi Kavanagh Doyle. I don’t get to see them enough as they live in Ireland and England. .

I have worked in an office and driven delivery trucks. Everything I’ve done I have enjoyed and learnt from.

My performance at the WEG in Normandy broke my heart. It did drive me on to make some changes and I wouldn’t have gotten to where I am now without it.

Nothing. You learn from your mistakes and become better because of them.

A bridlewasher! Like a dishwasher but for bridles, I HATE cleaning tack!

I’ve two, running the Dublin Marathon in 2006 And training Vancouver to Grand Prix when plenty of people said to give up along the way.

Peanut (one of our dogs, at 2 years old she still smells like a puppy)

I don’t do sorries.

On the sofa curled up with Patrick and my dogs..

The ability to get up early in the mornings!

A couple of weeks ago after one of my horses passed away.

Many times when JP was being a d**k.. (Not really)