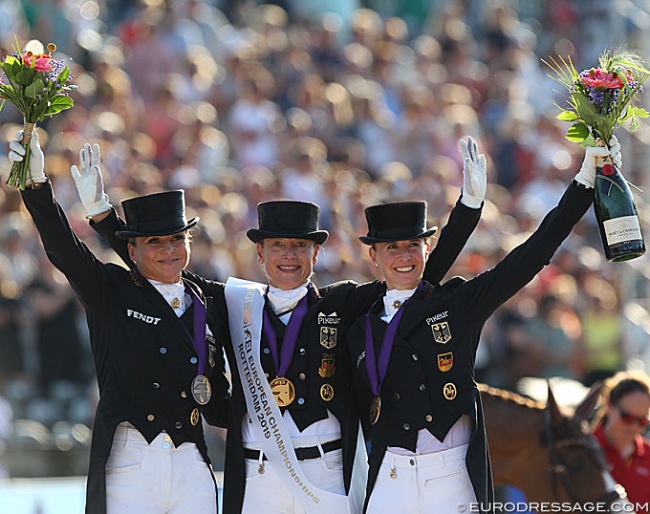 The weather conditions for the competition were like a box of chocolates: a little bit of everything! It started out with chilly temperatures and massive downpours of rain for the Grand Prix, followed by a sudden rise in temperature during day and a drop for the last Grand Prix Special riders competing under floodlights, followed by the thermometer soaring to 30 ° c on Saturday for the Freestyle Final.

The tension was palpable in the main stadium for the freestyle.  The arena was packed to the rafters for the first time this week. The empty spots seen in the stands were only because people were seeking shade in other seats elsewhere.

The fifteen best riders from the Grand Prix Special, excluding only Cosmo as he was the fourth rider on the German team with 78.116% and therefore excluded from the Kur as only three best ones are allowed to move on to the Finals. The FEI decided on this widely disputed system more than ten years ago It allow for a bigger range in nations into the big finals, but sometimes keeps the better scoring combinations out.

Performing to Michael Erdmann arranged music based on 19th century opera music (Puccini's O Mio Babbino Caro", Verdi, Rigoletto, and for the umpteenth time Beethoven's Ode to Joy), Werth and Bella Rose began strongly with a piaffe pirouette followed by some passage in which the croup stayed high, but the rhythm was good. There were two trot extensions with good overtrack but Bella got quick in the tempo like a sewing machine. The passage half pass followed by the trot half pass was delightful. The collected walk was short and it took a moment for the mare to pick up the piaffe, but that one was well executed with the horse trying to lower the haunches more. The first part of the test was extremely well ridden. In the canter work there were a few small blemishes but no mistakes. The extended canter right was a bit downhill, the one to the left much better. The pirouettes are all small but the mare is in a four-beat rhythm and rocks on the forehand. The two tempi changes were excellent: uphill and ground covering, but there could even be more forward flow. The ones are quite short though even though the mare has a nice silhouette in them. In the penultimate piaffe Bella leaned a bit on the shoulders, but the final piaffe pirouette was superb and had the crowds clapping.

Werth is such a top scorer in the freestyle because she rides to a Degree of Difficulty between 9.7 and 10, earning extra points just because of the technical high standard. Furthermore the 50-year old serial medalist understands the concept of freestyle riding ! Her music is tuned into her horse and plays on the emotions of the judges and spectators, building towards a crescendo and emotive finale.

The seven judges - Susanne Baarup (DEN), Irina Maknami (RUS), Isabelle Judet (FRA), Mariette Sanders-van Gansewinkel (NED), Evi Eisenhardt (GER), Clive Halsall (GBR), and Janet Foy (USA), had the difficult task of separating the wheat, not from the chaff, but from more wheat and ranking the best in the world. They rewarded the ride with 90.875%. Four judges had the pair first, and three second. Werth was again European Champion; in 2017 she accomplished the feat on Weihegold and this time on Bella Rose.

"It was a great atmosphere. It was such a long week with different kinds of weather," said Werth at the press conference who was visibly ecstatic about her gold but also emotionally relieved the fight was fought. "Bella was always giving me a super feeling, she always wanted to do her best. We had great sport, it was a tough competition. Today I had a few little things improve but there were so many highlights."

A seasoned competitor with thirty years of European Championship experience down her belt, Werth says that each time it's a new adventure. "Each championship has its own laws and rules. I can't ride on a statistic (this is her 20th European gold medal). It is a result of a lot of years in the sport and on so many different kinds of horses. I'm still motivated. I wake up and want to ride. Madeleine (Winter-Schulze, her sponsor) gives me all the freedom to do it the way I like to do it."

Never before has Dorothee Schneider been so close on the heels of Isabell Werth, but in the end she ended up with her second silver alongside team gold.

She entered the arena as the penultimate rider to go and had to beat Isabell's 90.875% Aboard Gabriele Kippert's 13-year old Hanoverian gelding Showtime (by Sandro Hit x Rotspon) she rode the Queen music and drew a giggle out of the crowds when the music said "Ladies and Gentlemen, It's Showtime". They began with beautiful passage half passes, followed by trot half passes with much ground cover, and a super engaged and swingy extended trot. There was a rhythmical piaffe-turn. The piaffe had good sit, but Showtime could be a bit more locked in the rhythm. The collected walk didn't flow as much as Showtime seemed to anticipate the piaffe turn. The extended walk had huge overtrack. The canter half passes were beautiful, a double pirouette left lacked bending and the one by A was quite big. There was a mistake in the one tempi changes and Showtime lost the rhythm in the piaffe fan at X. Also the final halt was not square. Overall the ride was a very strong one and Schneider would have won Kur gold medal if not for the mistake in the one tempi changes.

The judges rewarded Showtime's test with 90.561%. She placed first with two judges, second with three and third with two.

"Showtime came in, saw the audience and told me 'let's dance now'," Schneider gushed at the press conference. "We enjoyed it together and we didn't think of the score of the others. We were on point and he had fun. And then getting over 90%, wow!" Schneider is now the sixth rider in the world to have scored over 90%.

No injustice would have been done had Jessica von Bredow-Werndl and Beatrice Burchler-Keller's 12-year old Trakehner mare Dalera BB (by Easy Game x Handryk) won gold in the Kur to Music.

Von Bredow-Werndl and Dalera probably rode the most beautiful, harmonious and scintillating freestyle of all 15 finalists. She was the 11th rider to go into the arena and after her test one finally got the feeling that a combination was romancing the audience with good, high quality music. The choice for LalaLand is a briliant one as it's soft tunes and love story fit the feminine pair. The had a great start with quality passage, a good piaffe turn. The mare got uneven behind in the rhythm in the half pass to the right, but she was engaged and ground covering in the trot extensions, even though she got slightly slow behind in a left extension. The collected walk was lateral at the start but improved. Werndl rode her mare with nice length in the neck, the nose could even be a bit more out. The two tempi changes were good, the ones correct. They finished on a super passage half pass, piaffe, passage half pass with immaculate transitions. What a ride!

The pair posted a well earned 89.107% to earn bronze - her first individual medal in her Grand Prix career, but she certainly was the winner of the hearts. One judge had her first one fourth, three third and two fourth.

"After this week, nothing surprises me anymore," said a relieved and thrilled Von Bredow-Werndl. "It was an exhausting week, emotionally. She felt extraordinarily good today. She was a bit nervous, I was nervous at the beginning, but I took a deep breath and we found each other. It was a beautiful dance."

After earning Grand Prix Special bronze, Danish Cathrine Dufour and her 16-year old Atterupgaards Cassidy (by Caprimond x Donnerhall) missed out on a second podium place as they finished fourth in the freestyle.

The combination had a strong test, but the magic they were able to conjure in the Special was not really there in the freestyle. The duo was also not helped by their music. Although their choice for piaffe-passage music ("Ain’t nobody" by Felix Jaehn & Jasmine Thompson) works really well to bring dance atmosphere to the arena, the rest if one big potpourri of sound. Each turn of direction and each tempo difference is marked by a different tune and it becomes a sound clutter.

Notwithstanding, Dufour showed some great dressage with the horse correctly in the bridle: poll highest point, nose out in the extensions. The first piaffe was a bit wide behind and there was some hesitation in the piaffe turn at A, but the extended walk was outstanding, the canter half passes balanced, the two tempi's lovely and the ones super. There was a bit of difficulty in the transition from the two's to the one's and one extended canter right lacked some swing over the back, but overall the technical part of the ride was great. They posted 87.711% for fourth place.

Ireland has had a mega week in Rotterdam. First the four team riders secured a team spot at the 2020 Olympic Games in Tokyo, then team anchor Judy Reynolds went on to score a personal best in the Grand Prix Special (78.252 %) for fifth place and they repeated that feat in the freestyle, with another fifth place on a personal best of 85.589%.

Judy and her parents Joe and Kathleen Reynolds's 17-year old Dutch warmblood gelding Vancouver K (by Jazz x Ferro) rode to some traditional Gaelic music that reminded much of the Michael Flatley's Lord of the Dance sound. The graceful Vancouver K is one of the few horses to really execute a piaffe in the classical way: lowering of the haunches and a lifting in the withers. Sometimes the black looks a bit tense and and insecure in them, but Reynolds kept the lid on the cooker throughout. The tempi changes were outstanding: super straight, uphill and ground covering. The horse really sits in the pirouettes and there was much power and energy in the extended canters. The horse was slightly restless in the mouth in the canter work and opened it on occasion. At the end of the test Vancouver ran a bit out of steam in the final piaffe pirouette and passage, but Reynolds rounded off her test with style.

And that brings the 2019 European Championships to a conclusion. The 2021 Europeans are scheduled to take place in Budapest, but let's first look a bit further east to Japan, where the Olympics will take place on 23 - 30 July 2019. They are the most important dressage competition in the world and their prestige outshines any World or European Championship.