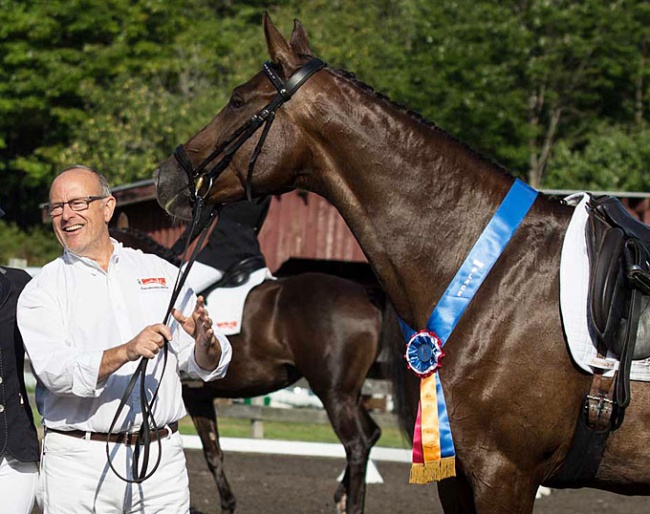 Scot Tolman, a North American breeder with 30-plus years of experience and a frequent buyer of frozen semen from Europe, believes there are two sides to Eurodressage's recent article Stallion Owners Demand WBFSH to Take Action Against Sperm Fraud

This is his reaction:

I’ve been breeding KWPN horses in North America and the Netherlands for a long time. I fully understand the maxim, “The best way to make a small fortune breeding horses is to start with a large fortune.” I have lived this experience, and, stupidly or not, continue to breed horses because I love it and I derive a lot of satisfaction in producing top horses for sport and breeding. Although I fully understand the action demanded of the WBFSH these stallion owners, I’d like to make another demand of the WBFSH: Hold European stallion owners accountable for the quality of product they export.

Breeding is a different ballgame in North America. I do most of my own breeding work, both with fresh-cooled and frozen semen, but I am an anomaly; most people rely on veterinarians to do their work. The costs are astronomical, especially for frozen semen breedings. Let me break it down for my European counterparts.

First, our costs start with the frozen semen itself. On average, we pay between $900 and $1500 for one dose of frozen semen. We buy our frozen semen from an agent, who adds another $75 to $125 handling fee per shipment. FedEx charges close to $300 to ship the container to our farm or to the veterinarian. We then incur about the same cost to return the container. Consequently, before we even begin breeding, we’ve spent an average of almost $2000. If we purchase more than one dose at a time, then the shipping and handling fees can be averaged over the number of doses, but it’s still expensive. Additionally, if a breeder doesn’t own his or her own storage tank, the veterinarians charge a monthly per-straw fee for storing the frozen semen.

Second, for breeders who must rely on veterinarians to do their breeding work, each cycle of breeding with frozen semen costs between $500 and $1500. If a breeder gets lucky, and the mare takes on the first cycle, he or she now has spent between $2500 and $3000 for that pregnancy. If a breeder isn’t so lucky, then he or she starts the whole process all over again, and incurs another $2500 to $3000. Again, it’s hard to believe anyone enters the world of breeding horses in North America without understanding the financial risks. I’m not whining about the expenses we can incur; rather, I’m attempting to outline the costs involved with our using European frozen semen.

This brings me to my demand of the WBFSH. If North American breeders are going to spend this much money using European frozen semen, there should be some accountability for the quality of the product.

I’ve been buying and using frozen semen since the last N-year of the KWPN naming system, so that means this is my 26th year breeding with frozen. Above and beyond the costs detailed so far, I can not tell you how many tens of thousands of dollars I’ve wasted on useless frozen semen from Europe or I would be divorced. I purchased ten doses of one stallion, and never got a pregnancy. Off the top of my head, I can think of 18 other doses of frozen, from a variety of stallions, that were useless. Add up that. How much money have I sent to these stallion owners now complaining that we breeders are taking advantage of them? I have sought accountability in almost all of these situations, yet have had only one European stallion owner stand behind his product and send me higher quality frozen semen from a different stallion at his own expense.

There are many European stallion owners who consistently produce a quality product, and a few who offer a live foal guarantee on their frozen semen sales. Most of these contracts have a limit on the number of doses that can be shipped at one time, however. Given the shipping, handling, and veterinarian costs outlined above, even without having to purchase subsequent doses, a North American breeder incurs significant expense to continue attempting to get his or her mare pregnant.

The main complaint of the stallion owners asking the WBFSH to take action involves the problem of breeders getting multiple foals from single doses, or, even, one straw, of frozen semen due to the advent of ET and ICSI. This is a legitimate concern, no doubt. On the flip side of this, however, an ICSI experience can easily cost over $10,000, and, unless a breeder is doing the work and has his or her own recipient mares, ET is going to be a minimum of $5,000. OK. Now look at those additional costs and factor in the lack of accountability for the quality of frozen semen often coming out of Europe. Enough people have been taken advantage of over enough years that I understand why breeders attempt to get as many foals as they can from whatever number of doses of frozen semen they’ve purchased. I’m not saying I agree with it, but I understand it.

Again, my response is from a North American perspective. Most of us don’t have the luxury most European breeders enjoy of bringing their mares to an insemination center at a minimal cost, with no additional semen-purchase costs during the breeding season if their mares don’t catch on the first cycle. I know from my experiences of breeding our own mares in Holland that stallion owners are much more willing to allow breeders to switch stallions at no additional expense if one isn’t working, charge one stud fee at the end of the breeding season if the mare in foal and a lesser stud fee or a half-price stud fee the following year if the mare isn’t in foal.

As is quoted in the Eurodressage article, “stealing is not normal”-- the vast majority of breeders are attempting to get one foal from one breeding dose. Likewise, most European stallion owners are exporting a quality product. For those who are not, however, there is no central record-keeping organization warning breeders about them. Just as there are stallion owners losing income because of a few people taking advantage of them, there are many of us being taken advantage of for thousands of dollars by a few European stallion owners.