Photo Report: Schneider and Faustus Top the Board at 2020 CDN Munster Indoor 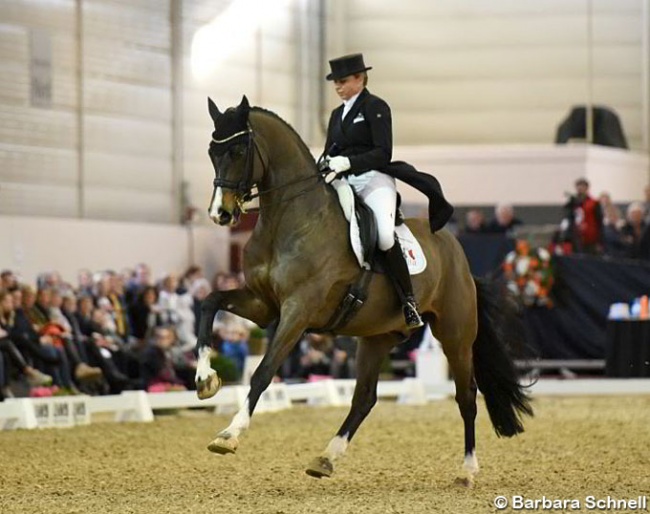 Dorothee Schneider and Faustus topped the board in the big tour at the 2020 CDN Munster Indoor on 9 - 12 January 2020. Traditionally the Munster Indoor event, also known as the K+K Cup, is the first competition of the year where several international riders present their (new) horses at a new level.

Schneider and Faustus are already a partnership since 2016 and the pair made its international Grand Prix debut two years ago. Three weeks after competing at the 2019 CDI Frankfurt, it was back in action for the 12-year old Hanoverian by Falsterbo x Forrest xx) in Munster.

The pair won the Grand Prix Special Tour heading a field of  23 competitors. The class is a national Grand Prix, which means riders are allowed to carry whips, which usually makes a difference with some horses.

Schneider and Faustus scored 76.520% in the Grand Prix and upped the ante in the Grand Prix Special to finish first with 78.13%.  At the press conference, Schneider said of her horse: "often is he more introverted and busy with himself, and then I notice that he asked me to help him."

Local hero, Munster citizen Ingrid Kmimke and the 12-year old Hanoverian stallion Franziskus finished second twice. They earned 74.360% in the Grand Prix and 75.745% in the Special.

"I had three clear mistakes in the Special," said Klimke. "Still I'm very happy to be second behind Doro. This is better than having a super feeling in the test and only leaving the ring with 72%."

Under 25 rider Jil Marielle Becks and the 12-year old home bred Westfalian Damon's Satelite (by Damon Hill x Rubin-Royal) were third twice, with 72.900% in the Grand Prix and 74,56% in the Special. "My father (Christian) helps me and Mr Balkenhol and this gives me the calmness to focus fully on my riding," said Becks.

The CDN Munster Indoor also featured a Grand Prix Kur tour of which the two classes were won by Anabel Balkenhol and Dorothee Schneider.

The Short Grand Prix counted as qualifier for the freestyle and boasted a field of 22 riders in total. Balkenhol and the 11-year old Brazilian Eduardo Byndyra owned Hanoverian Crystal Friendship (by Fidertanz x De Vito) won the class with 73.372%, ahead of Dorothee Schneider on the 16-year old Hanoverian mare Fohlenhof's Rock 'n Rose (by Rubin-Royal x Feiner Stern).

Schneider and Rock 'n Rose went on to win the Kur to Music with 80.45% which Balkenhol did not opt to ride. Under 25 rider Anna Christina Abbelen and the 17-year old Hanoverian Henny Hennessy (by Hofrat x Achenbach) were second with 76.25%.