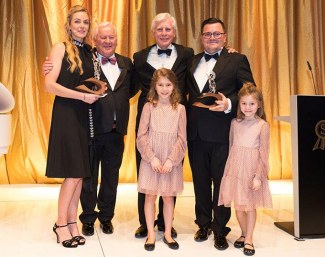 The ball room at the P.S.I. Auction has never been fuller, and the atmosphere has never been more emotional. More than 500 friends, clients, and supports of Performance Sales International came together to celebrate the past 40 years of P.S.I. history and to support the initiative Riding Against Hunger.

The P.S.I. awards have become a coveted prize to honor some of the most outstanding and valued personalities of the equestrian industry. This year’s award winners were no exception.

The award for the category sport was introduced by not one, but two laudators. However, when Monica Theodorescu is the person of honor this seems only suitable. The world’s number one dressage rider, Isabell Werth was meant to present the unique Swarovski crystal horse to her former team mate, friend, confidante, and now coach. However, an unfortunate accident and subsequent surgery for Madeleine Winter-Schulze meant that Isabell’s presence was required in Salzburg by her close friend’s side. Dressage committee chair Klaus Roeser quickly stepped in to introduce Theodorescu before a live video call to Isabell could be established. Monica Theodorescu’s contribution to the sport of dressage has been outstanding, first as a successful rider representing Germany at Olympic Games, European and World Championships and since 2012 as the highly respected national trainer. She and her parents have always had a close connection to the P.S.I. Team.

Former German minister for economics, Karl-Theodor zu Guttenberg announced the award for the category supporter with a wonderfully detailed and light-hearted laudatory speech highlighting the many achievements of the prizewinner, Dr. Ursula von der Leyen. The passionate equestrian and Ullrich and Bianca Kasselmann have been close friends for more than 40 years, since their time working together at the Verden Auctions.

Von der Leyen has also been instrumental in supporting the ‘Riding against Hunger’ initiative, becoming a patron in 2011. In December 2019 the ambitious politician was elected as the President of the European Commission and it was this new responsibility that prevented her from joining the guest list at Ankum tonight. However, ever the consummate professional she delivered her thank you speech via video message, “Thank you so much for this award, I am deeply honored. It saddens me that I can’t be with you tonight, because as you are watching this video, I will be in Africa. My first foreign mission as President of the European commission is a trip to the African Union in Addis Ababa. As large as the problems in our neighboring continent may be, we can change these into new opportunities if we unite and take these things on together. The initiative Riding Against Hunger is an outstanding organisation, which would never have been made possible without the dedication and leadership from its two founders Ullrich Kasselmann and Gudrun Bauer.”

Von der Leyen also pointed out the great contributions of Ulli Kasselmann and Paul Schockemöhle to the sport and the importance of the horse to society, “In Europe there are 7 million horses, 3,5 of which are active in the sport and each year, around 20.000 equestrian events take place. Equestrian sports impart values of integration and altruism. Children that may have a more difficult time than others discover their strengths and confidence through therapeutic riding. Horses are also an important economic factor in many rural European areas and an important part of our traditions and culture. This heirloom should be cared for and preserved. You, dear guests are all doing your part this evening.”

The P.S.I. award for lifetime achievement was presented by German journalist Stefan Aust and went to Andreas Meyer-Landrut, a former German diplomat, West Germany's ambassador to the Soviet Union and also a passionate rider. Meyer-Landrut was deeply honored by the distinction.

The emotional highlight of the evening came about when the next generation of P.S.I. leaders surprised their fathers with a very special award. Francois Kasselmann and Vivian Schockemöhle came together to sum up the past 40 years and to honor their fathers’ work. “We are here to celebrate two men, who would have you believe they are just two farm boys, who wanted to conquer America 40 years ago.” The younger generation presented Ulli & Paul with the same awards that the two P.S.I. founders have been giving the people that inspire them for decades, only this time, they were on the receiving end. The crowd was so moved by the gesture that over 500 guests stood in honor of these two living equestrian legends.

The event is by definition a “Charity Gala”, and where would that be without the charity aspect? As is tradition, guests were asked to show their commitment to “Riding Against Hunger”, Ullrich Kasselmann’s charity initiative of choice.  The event raised over €20,000. “With these funds, essential projects will be brought to life such as lessons for children, more effective agriculture, clean water, and animal welfare.” Said president of the European Commission, Ursula von der Leyen.